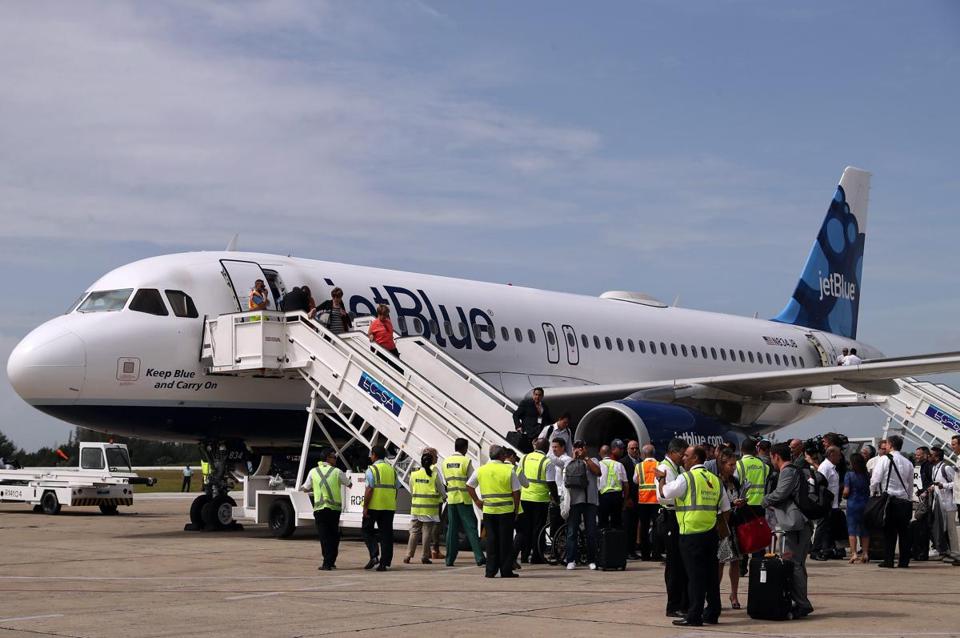 JetBlue Airways is making another attempt for permission to fly between Boston and Cuba, petitioning the US government to strip a rival airline of a new route between Los Angeles and Havana and replace it with a flight from Logan Airport.

JetBlue is asking the US Department of Transportation to reject a request by Alaska Airlines for more time to get its newly awarded flight between Los Angeles and Havana up and flying. Alaska Airlines last week asked the department to delay launching the route until early January, and JetBlue promptly seized on the request, saying the US should instead replace the flight with one between Boston and Havana.

And even if the delay is granted, JetBlue said, the government should designate its proposed route from Boston as the “backup” in case Alaska Airlines ultimately decides not to operate the flight.

JetBlue, which counts Boston as one of its top markets, has sought to operate the Boston-to-Cuba flight since the United States and Cuba agreed in February to resume air service between the Cold War rivals.

US carriers can send a total of 20 daily flights to Havana. JetBlue was awarded four of those — one from New York and three from Florida airports. But its request for routes from Tampa, Newark, and Boston were not granted. The Havana routes have not yet started, but in late August, JetBlue began operating flights to another Cuban airport in the central city of Santa Clara.

JetBlue declined to comment about the filings on Monday. But the airline seemingly views Boston as an important market for flights to Cuba. In an earlier filing, the airline argued that Boston “is one of the top markets in the United States, with significant connections to Cuba that will drive demand.”

After the government announced the 20 daily routes, JetBlue requested that Boston be given at least a weekly Saturday flight to Havana.

The trips from New York represent the closest nonstop option for Bostonians to get to Cuba. Alaska’s flight from Los Angeles, meanwhile, would represent the only one from the West Coast to Havana.

Travelers are only allowed to visit Cuba for nonvacation reasons, such as family, business, educational, religious, journalistic, or humanitarian purposes.

Alaska Airlines cited “commercial and operational challenges” in asking to delay the start of service until Jan. 5, which is 37 days after the Nov. 29 date that had been a government precondition when it awarded the route.

Because tourist trips to Cuba are still not permitted, the airline said in its filing that launching the flights shortly after Thanksgiving would be a challenge because “US consumers’ travel to the Caribbean region during the holiday season is predominantly for purposes of vacation.”

In its response, JetBlue said those same problems are true for every other airline.

“If Alaska is concerned that the ban on tourism-related travel will make its route not viable, it should turn its frequency over to the department for reallocation to carriers like JetBlue that are prepared to provide service to authorized customers,” JetBlue said.

The Massachusetts Port Authority, which runs Logan Airport, has also lobbied the federal government to consider a weekly flight from Boston.

In comments filed with the government in August, Massport chief executive Thomas Glynn said Boston’s Cuban-American population numbers 15,000. He also argued that the region is well-suited for trips to Cuba that are allowed under the approved travel purposes because of the number of health care, biotech, and higher education organizations in and around Boston.

Glynn’s appeal did not ultimately affect the final routes selected. In a statement Monday, spokeswoman Jennifer Mehigan said Massport is “hopeful that as the flight restrictions are loosened, Boston will be in the mix.”

She declined to specifically address JetBlue’s bid to take over the Alaska Airlines route.

“The competition for direct Havana service has been intense and JetBlue is going to make their business decisions based on what is best for them. We applaud their belief in a Boston route,” she said.