JetBlue official: Cuba is one of our most popular destinations 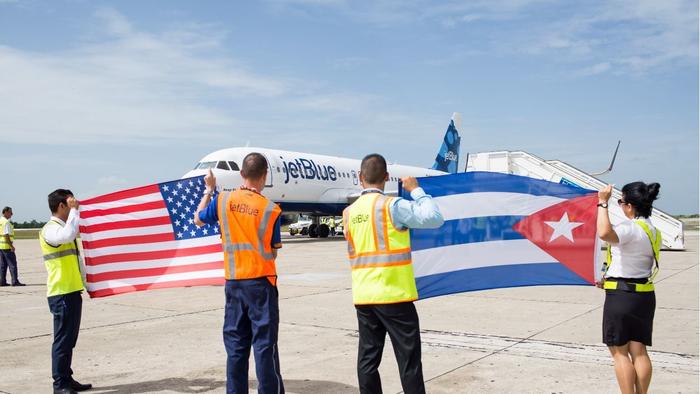 Camaguey, Cuba, Nov 7.- Cuba is one of the most popular destinations of the American airline JetBlue Airways, said some of its officials in this city, after the arrival of the first flight of that company to the Ignacio Agramonte International Airport.

The Airbus 320 (A320) landed with 80 passengers in this city, second in Cuba where the company operates. JetBlue was the pioneer in the reestablishment of regular flights between Cuba and the United States in August this year, with the route Fort Lauderdale (Florida) -Santa Clara (Province of Villa Clara).

Raúl Alcázar, one of JetBlue’s executives, said that since the restart of commercial air operations between both countries, Cuba has been one of its destinations of greater demand in recent months.

We are working to provide an experience of high quality, safety and comfort, to reduce tariffs between both destinations, to expand our service to four cities before the end of 2016, and to boost growth in the years to come, he explained.

In an exchange with the press, Danielle Sanders, Corporate Communications Manager of the company, noted that the next Cuban city for them will be Holguin, with the inaugural flight on November 10th, with which there will be six daily operations of JetBlue in Cuba.

Before the end of the year, the airline will fly to Havana from Fort Lauderdale, New York and Orlando, Sanders stated.

Leudes Escobar, director of Ignacio Agramonte International Airport, explained that both sides have worked together to offer high standards of quality in the attention to the traveler, security, refueling of the planes and other aspects.

JetBlue is the third American airline with direct flights to Camaguey, where American Airlines began on September 9, also with one daily entry and exit operation, and Silver Airways, on October 13, with five flights a week. (acn)