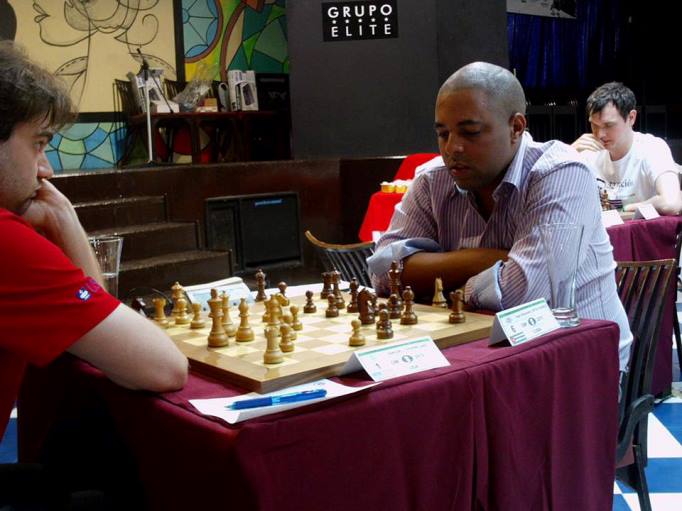 Vassily Ivanchuk started the 2017 Capablanca Memorial slowly with three draws, but two beautiful wins in Rounds 4 and 5 have seen the 7-time Champion take a half-point lead at the midway point. Krishnan Sasikiran is the only other player on a positive score after he beat Polish Champion Kacper Piorun in Round 1 and drew his remaining games. With five rounds to go, however, everyone still has something to play for. UPDATE: Now with Jan Gustafsson’s analysis of Ivanchuk-Shankland!

The 2017 Capablanca Memorial is both very familiar… a 6-player double round-robin taking place in the same location as last year’s event, the Barcelo Solymar Arenas Blancas Hotel in Varadero, Cuba:

…and very unusual. The line-up is missing the top Cuban players Leinier Dominguez and Lazaro Bruzon, and even the Cuban no. 3 Yuniesky Quesada. Bruzon chose to play in a zonal event in El Salvador, where it seems he fell just short of winning one of two places on offer in the World Cup later this year. Dominguez is reported to have asked the Cuban Chess Federation for a break in playing tournaments in Cuba. He’s also recently started doing shows for chess24’s Spanish site.

In an article entitled The Ghost of Capablanca, just published in Southwest: The magazine, Brin-Jonathan Butler talks about how he attended a simul in the Cuban capital Havana earlier this year:

“You made it,” he says, smiling. “There is good news and bad news I have for you. Domínguez will not be here this morning. However, one of our best gran maestros will be here, Lázaro Bruzón.”

A crowd of equal parts children and adults gathers around the restaurant next to the hotel entrance, and at 8:30 a.m., we’re let inside a surreal room furnished with jukeboxes, 1950s American convertibles, and aging Cessna planes. Dozens of tables surround a stage with a screen hanging over a main chess table—the centerpiece on display.

Hedman approaches with Bruzón, still boyish at 34, at his side. After shaking hands, Bruzón explains he learned chess from a neighbor when he was 7. By 9, he’d devoted his life to the game, and the Cuban government recognized a prodigy in its midst. At 18, he won the World Junior Chess Championship, but now, 16 years later, he explains that he is cutting back on international tournaments. He’s receding from a life perpetually in the orbit of chess, a confession that is accompanied by a mix of mournfulness and relief. “I am immensely proud to have represented my country around the world,” he tells me.

There’s an ease about Bruzón’s demeanor that leaves an impression on me. It’s a stark contrast to the lingering tension and friction felt by elite Cuban athletes in other sports. “Have any of the top Cuban chess players left the island?” I ask Fernando after Bruzón excuses himself.

“None that I know of,” he says. “Chess players who devote their lives to chess probably live much more comfortably here than they would in a different system.”

Which makes sense. I’ve interviewed some of Cuba’s finest boxers and baseball players. In many cases, they’ve rejected the vast fortunes that come with leaving the island and crossing 90 miles to compete in the U.S. While none openly regret their decision, they lead lives much like double-exposed photographs, always wondering how they would have fared if they had left. Over the last 10 years, Cuban baseball and boxing have been gutted by international poaching. But not chess. On top of having their needs looked after, chess players in Cuba are seen as something between an athlete and an artist. They might be more appreciated and respected here than anywhere else.

After turning the matter over, Fernando puts his hand on my shoulder. “We admire la lucha [“the struggle”] as much on the chessboard as we do in the boxing ring. Our lives here have always been a struggle, and approaching that struggle with the courage of a boxer or the cunning and intelligence of a chess player is something that commands our respect. The same rules apply in a boxing ring or on the chessboard or growing up in our crazy system: resolver. Many places around the world are confronted with the same thing. They just don’t have our sense of style.”

Isan Reynaldo Ortiz Suarez has stepped in to represent the home country, while Peru’s Emilio Cordova and US team member Sam Shankland make up an interesting line-up. You can play through all the games and check out the pairings below – click on a game to open it with computer analysis or hover over a player’s name to see all their results so far: