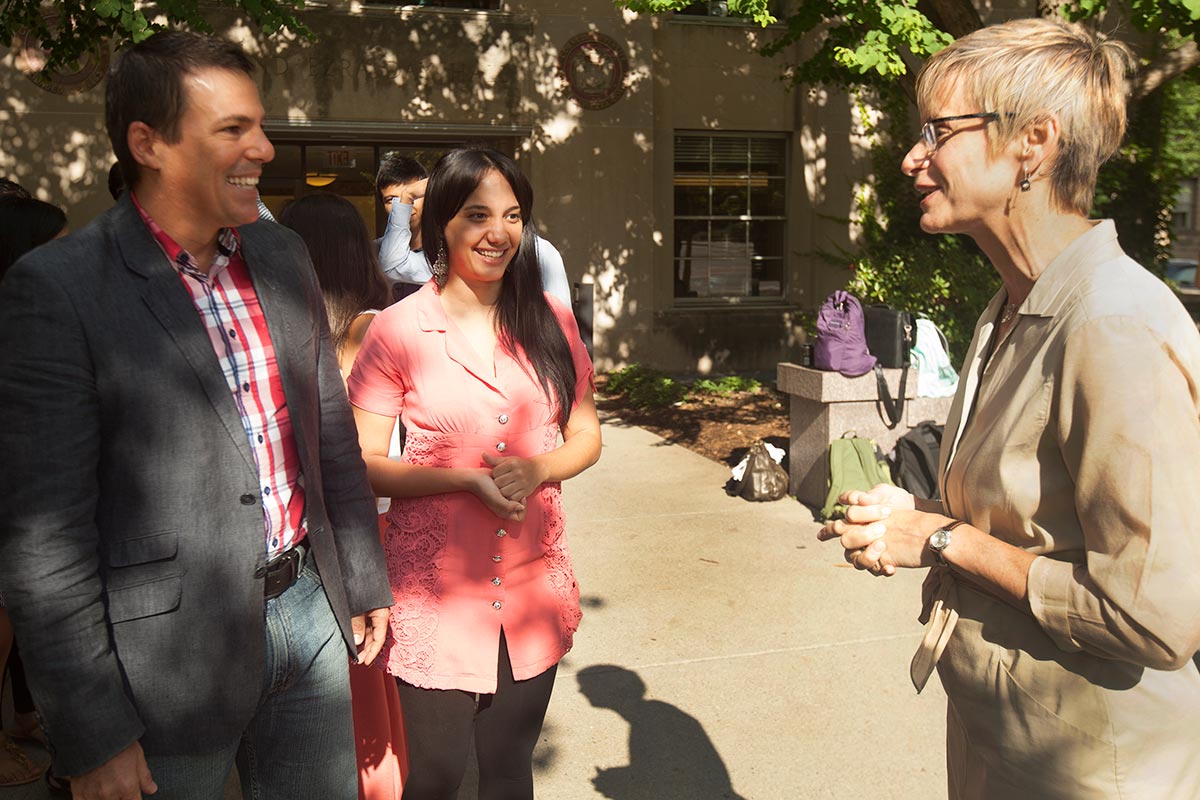 Emanuel Mora was not just another visiting professor teaching on campus this summer.

He is the first professor at Cornell – and possibly the first in the United States – to come from Cuba to teach and return home, thanks to recently restored diplomatic relations between the two countries and Mora’s 13-year association with Cornell as a scientific researcher.

Maydel Fernandez, who participated in the CienciAmerica summer research program on campus, is believed to be the first Cuban student in 50 years to study in the U.S. and return.

Both came from the University of Havana, where Mora is a professor of biology and twice has been honored as its best researcher. He said he was happy and excited to be here to teach a course in biopsychology for the School of Continuing Education and Summer Sessions.

Mora said 20 years working in Cuba in animal physiology, neurophysiology and animal communication is “possibly the best background to understand that the human mind is a new and recently evolved acquisition of nature.”

The course, Mora said, “allows students to understand that whatever happens in the mind, and behavior, has a biological foundation. What is behavior? … Where are ideas coming from? We’re discovering more and more every day about how our brain works.”

His engagement with Cornell research began in 2002, when the Lab of Ornithology led training courses in Cuba in neurobiology and bioacoustics.

“I was studying bats and moths communicating in the ultrasonic range,” he said. “These were people who were actually leading the field, and that sped up my whole research program. The [Lab of O] program was so good. It gave us training and capacity building, and equipment as well. It helped my joint researchers in bioacoustics and addressed questions about the neurological basis of behavior. … Cuba is one of the hot spots for biodiversity, and we have the opportunity to address questions no one else could.”

He expanded his bat research program after that, and began to develop advanced courses in Cuba and other countries.

“I started training students in the basics of communication in a wide range of animals, with that training we got from Cornell,” Mora said. “We developed a large lab [with] more than 40 students … It was a very lively lab. As president of the Neotropical Bioacoustics Society, we wanted to foster training in several Latin American countries. And every time, I brought Cornell stuff. Everywhere I went, we spread the word on bioacoustics research to Brazil, Colombia, Mexico and Peru, from what the Lab of O had started in Cuba.”

Mora’s work in how the brain supports natural behaviors led him to meet Tim DeVoogd, professor of psychology in Cornell’s College of Arts and Sciences and director of the Latin American Studies Program.

“Tim had a lot of experience working on neurobiology and behavior in birds,” Mora said. “He came to us and taught a section at my university, and a friendship just happened. That’s one of the advantages of sharing your knowledge and experience in science.”

Mora has been instrumental in the Cornell in Cuba Research Program – he helped set up the program with DeVoogd. For the inaugural semester in the spring, he worked with Cornell students Ian Pengra ’16 and Wesley Schnapp ’16, who attended classes at the University of Havana and did research with Mora on bat behavior and bioacoustics.

“This first experience was very positive. Ian and Wesley told me they had a great time in Cuba, that it was a life-changing experience for both,” Mora said. “We’re ready to scale up; this is the right moment to make it happen.”

More Cornell students will have opportunities to study in Cuba, DeVoogd said: “Cornell Abroad is sending students for a more traditional abroad experience this fall, and then we’ll do science placements [in the research program] in the spring.”