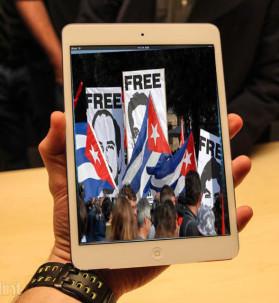 Havana, Cuba, Aug 2.- The International Committee for the Freedom of the Cuban anti-terrorist fighters held in US prisons will take new actions from September 12 through October 8 in Washington DC and San Francisco, while activists in different cities of the world will also to mark the 16th anniversary of the arrest of the five Cuban heroes.The announcement reads that the International Committee for the Freedom of the Cuban 5 is returning to Washington D.C. after 5 days of activities for the Five in June. Members of the Committee, other solidarity friends and personalities will visit Capitol Hill to follow up on their June visits and organize other activities, including a rally in front of the White House and a Public Forum. Also in San Francisco, CA the committee is organizing a Bicycle Ride in Support of the Cuban 5.

The picket line in front of the White House will take place September 12 with the slogan 16 Years is Enough, Free the Cuban Five Now! On Saturday, September 13, the committee will organize a discussion panel at the Service Employees International Union with the participation of local leaders, and speakers such as  Jose Ramon Cabañas, Chief of the Cuban Interests Section in Washington DC; Yeidckol Polevnsky, former Vice President of the Mexican Senate;   Stephen Kimber, Professor of Journalism at the University of King’s College in Halifax. Author of What Lies Across the Water, the Real Story of the Cuban Five, among other personalities.

Meanwhile in San Francisco, California, activist will do a bicycle ride on Sepember 27 to raise awareness about the case of the Cuban 5.

The committee explains that Cuban antiterrorists Gerardo Hernandez, Ramón Labañino and Antonio Guerrero remain in U.S. Prisons. These three men are paying a high price for defending their country against terrorism.

Instead of the continuation of their imprisonment they deserve to receive medals of honor for their actions. It is long overdue for President Obama to negotiate in good faith with Cuba to reach a humanitarian solution to this case and allow them to return to their loved ones. For more information call 510-219-0092 or 415-269-7917. (ACN)