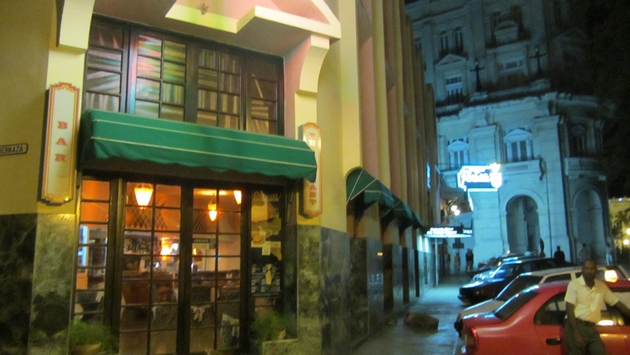 PHOTO: Old Havana on the street where Hemingway used to hang out. (Photo by David Cogswell)

The world changed for Insight Cuba the day of president Obama’s speech Dec. 17, 2014, when he told the American people he was restoring diplomatic relations with Cuba after half a century.

“It’s been absolutely crazy,” said Tom Popper, president of Insight Cuba. “We’ve never seen anything like this. And it hasn’t slowed down. We figured, well, maybe the news cycle will quiet, we’re going into Christmas … OK, now we’re going into New Year’s, people will get distracted… And it hasn’t let up. It’s kind of like a new world.”

It shouldn’t have been a surprise. “When you think about it, the President of the United States just advertised that Americans can go to Cuba.”

Insight Cuba started operating trips to Cuba in 2000, then suspended them in 2003 when the Bush administration tightened up restrictions on travel to Cuba. When President Obama opened the door again in January 2011, Insight Cuba was the first to start operating again.

Now that Obama has lowered the barrier to entry even more for travel to Cuba, the company is running at full speed to keep up with demand.

“We added 70 new departure dates after the announcement,” said Popper. “Then we added another 50. So we’ve added 120 total new departures. And we’re selling out. Usually we have some capacity 30, 45, 60, 70 days out. But a lot of our tours are selling out faster. Now you can’t get on one until April, which is not usually the case booking between Christmas and New Year’s. Even with additional departures and increased capacity, tours are still selling out.”

People are scrambling to book, Popper said, because they just heard about it, or because they want to see it before it changes.

“That’s always been a theme among our travelers,” said Popper. “They anticipate that one day people will be different and they want to see it now.”

This week the company will add more departures for the summer, which is typically a slow period.

“We’ve reached out to a new audience,” said Popper. “Typically travel to Cuba has been the 50-plus crowd. We’re now starting to see a younger demographic saying, ‘You know what? This is something I want to do.’ So they’re taking advantage of summer vacations and breaks to do it.”

Tour operators are still waiting for the U.S. Office of Foreign Assets Control to release its new regulations, revised to comply with Obama’s executive order. Until the new regulations come out, the old ones are still in effect.

“There’s plenty of speculation,” said Popper. “I’ve sat and looked at the President’s FAQ sheet and read it 500 times to see if I can get an underlying current. There is definitely some very specific language that they crafted. But in the end we’ll just have to see.”

Popper speculates that there are three possible scenarios. One is that OFAC will create a generalized category for people to people that allows individuals to go, but they would just have to be sure to conform to the people to people requirements, which means purposeful travel, meetings with artists, doctors, etc. But they would not have to file the rigorous reports on every day’s activities that are now required.

Popper thinks that possibility is unlikely.

What Popper thinks is more likely is that anyone who professionally organizes travel to Cuba will be able to do so without applying to OFAC. Then companies who are now licensed would be able to operate as destination management companies. At the moment that is a more manageable way to handle it than opening the floodgates to individuals.

The third possibility is some combination of the other two.

Although the banking restrictions will change over time, paying money to Cuba is still a problem at this time. Cuba has not yet formally been taken off the list of terrorism-sponsoring nations by the State Department. And OFAC still requires a full schedule of educational activities for people to people travel.

But significantly, according to Popper, President Obama specified that all 12 categories of traveler now allowed under OFAC’s tour regulations will fall under the general license. That means that although neither individual people nor organizations will be required to submit an application to seek approva. And there won’t be a reporting requirement afterwards.

That will be a huge savings for operators like Insight Cuba.

“We started on Nov. 1 to draft that application,” said Popper. “Probably it was going to be about 1,000 pages. It’s a massive job. It requires a full-time, dedicated person for three months to draft it.”

And the reporting requirements are stringent.

“For each departure, OFAC wants to see how many people traveled, who the Insight Cuba representative was on the trip, where you went, and each day exactly what the itinerary was. Not only do they want to see a list of activities, they want to know what it was you did, who you saw and how it created meaningful interaction between the Cubans that we met with and the Americans. Each activity was three paragraphs long. It was for every departure, every activity for two years, where you went to lunch, who you saw, what you did, who discussed what and why that meets the criteria of people to people.”

That reporting requirement will go away. Under the new regulations, all of the categories of travel will fall under the general license, such as what is now available to Cuban Americans visiting families in Cuba, journalists or people engaging in sports events, and several other categories of traveler. The general license grants the authority to travel to Cuba under the regulation, but tour operators or travelers won’t have to seek prior approval and they won’t have to file reports. They just have to promise to comply with the regulations. And if they are questioned, they had better have answers.

OFAC said it would get its new set of regulations drafted before the end of January. It would not be surprising if it takes longer. But until the new regulations are out, very little is certain.