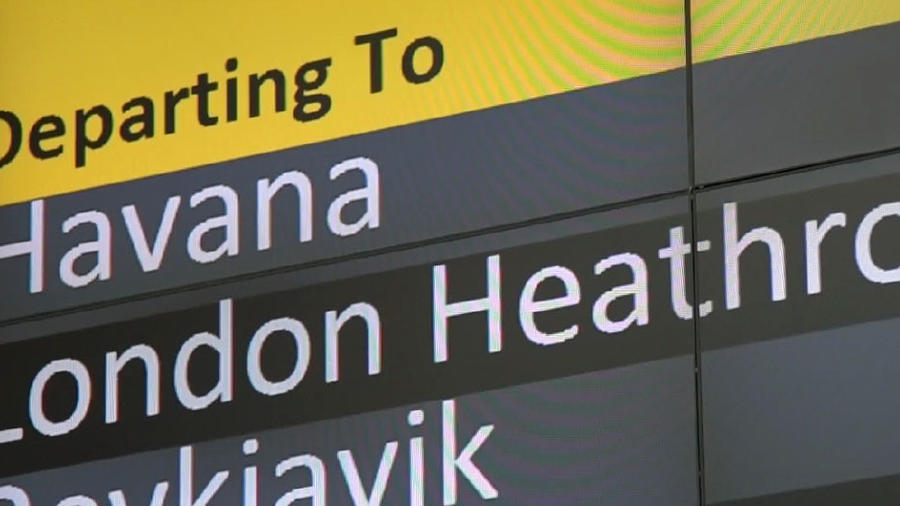 The airport established the weekly flight out of Baltimore after President Barack Obama decided last year to re-establish diplomatic relations with the Communist nation, open an embassy in Havana and relax trade and travel restrictions.

Among those on the inaugural flight were a delegation of government and business leaders from Anne Arundel County who planned to meet with businesses, arts organizations and others. County Executive Steve Schuh suggested that youth baseball teams could travel between Annapolis and Havana for tournaments, or school groups could visit their counterparts.

“Right now Cuba is a closed box and nobody knows very much what’s in there in terms of business development, cultural exchanges, educational and athletic exchanges,” Schuh said.

While Baltimore has a small Cuban-American community, travel agents said Baltimore-Washington International Thurgood Marshall Airport is well-positioned to accommodate business and government officials traveling to Cuba because of its proximity to the District of Columbia, universities, think tanks and nonprofits.

Airport officials say the Cuba flights are part of efforts to expand international travel options. So far this year, airlines at BWI have added seven new international destinations, including Havana.

“Our international traffic has been growing in recent years,” said Jonathan Dean, a spokesman for the Linthicum airport. “This service to Cuba is an important addition.”

“This is very early in the process,” he said. “Things are just starting to break loose.”

The county delegation plans to meet with the U.S. ambassador to Cuba, Jeffrey DeLaurentis, as well as officials from Melia Hotels International, a multinational hotel company with several locations in Cuba. They’ll take walking tours and visit museums before returning Saturday.

Penny Pritzker, the U.S. secretary of commerce, is headed to Cuba next week for economic talks. The goal of the meetings is to “facilitate more effective implementation of new U.S. policies toward Cuba,” according to the Department of Commerce.

For decades, travel to Cuba has been restricted for Americans. With the re-establishment of ties between the two countries, there are fewer hurdles, but it still takes some work. Travelers must have a passport and sign an affidavit attesting that their trip is for an approved purpose, such as education, humanitarian projects, religious activities or visiting family. A special visa is also required.

Hauf’s company has been running tours and selling travel packages to Cuba, but only recently got approval to take care of the flights themselves. The company also runs flights out of Miami and Orlando. While his Florida flights cater to Cuban families visiting relatives, he expects a broader range of customers from BWI.

The round-trip airfare between BWI and Havana is $649, and the price is expected to increase after October. Island Travel & Tours is approved for two weekly flights from BWI to Havana, but is only offering the Wednesday flights for now. The first flight this week had about 30 passengers on a plane with 126 seats.

“Am I disappointed? No, not really now. The quality of people is what we want,” Hauf said, explaining that having the Anne Arundel delegation, philanthropists and others on the inaugural flight is helping establish his credibility with potential customers.

While he thinks the BWI flight will become more popular, Hauf doesn’t expect to make money on it. He said he makes his money on the ground in Cuba, booking hotels and leading tours for Americans.

“The flights are not profitable. They’re meant to support the program,” he said.

Caridad Morales Nussa is excited to have direct flights from BWI to Cuba. As program director for Cuba Life Travels in Baltimore, she sets up trips to Cuba.

In the past, her clients had to fly through Miami. Now she’s authorized to sell seats on Island Travel’s flights out of BWI — a 31/4-hour flight —- and passed out informational cards at the airport on Wednesday.

“You can leave from here, straight to Cuba,” said Morales Nussa, who has led trips for students studying Spanish and Catholics who saw Pope Francis in Cuba. In January, she’s taking a group of college students and professors from Pennsylvania to Cuba.

Filmmaker David Robinson of Morgan Creek Productions has been visiting Cuba for five years to teach TV and film classes.

“What really draws me to Havana is the people,” he said. “The people in Cuba are absolutely amazing — their joy for life and for living without having the excess that sometimes we in the states and other countries have.”

Dr. Kim Hammond of Falls Road Animal Hospital in Baltimore led a small group of people hoping to explore charitable and humanitarian opportunities in Cuba. Hammond, who is president of a philanthropic organization called the Milnel Foundation, has visited Cuba many times and thinks connections can be forged between Baltimore and Havana.

By Pamela Wood, The Baltimore Sun