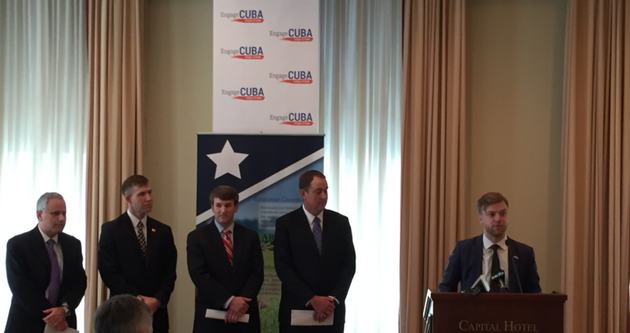 Officials representing the Arkansas and Cuban governments gathered with rice growers in Little Rock on Monday, calling on Congress to lift a decades-long trade embargo against the island nation and promising a trade deal as an incentive.

A “memorandum of understanding” has been reached between the USA Rice Federation and the Cuban government to begin exporting more American-grown rice to Cuba once the embargo is lifted, said USA Rice chairman Dow Brantley, a rice farmer from central Arkansas.

“Unfortunately they’re not buying our rice,” Brantley said. “They’re buying rice from our competitors such as Brazil and Vietnam.”

Arkansas is the top rice-producing state, and Cuba is the second largest importer of rice in the Americas, Brantley said.

According to the U.S. Department of Agriculture’s Economic Research Service, loosening of restrictions led to the U.S. being the No. 1 agricultural exporter to Cuba from 2003 to 2012, but a continued ban on extending credit to Cuban buyers caused a slip to third by 2014.

Juan Lamigueiro Leon, the deputy chief of mission for the Cuban Embassy in the U.S., said the type of long-grain rice grown in Arkansas is a favorite of Cubans and that “there is no reason not to increase our trade in the near future.”

In his recent trip to Cuba, President Barack Obama called on Congress to lift the embargo, USA Today reported.

Gov. Asa Hutchinson has also visited Cuba, and a representative from his office was among the group of 37 officials representing the state, agricultural and business interests to be named on the Arkansas council of the Engage Cuba Coalition, which seeks normalized relations.

U.S. Sen. John Boozman and Rep. Rick Crawford were also named as supporters by the coalition in a news release.