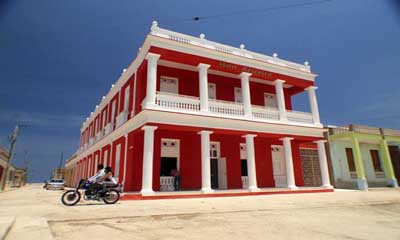 GIBARA, Cuba, May 3 (acn) Cubanacan and Iberostar groups, from Cuba and Spain respectively, signed an agreement today in which the Iberian company will manage the hotels of the Holguin city of Gibara, declared new tourist destination of the Caribbean country.

Yamili Aldama, president of the Cuban company, and Luis Jimenez, commercial director of the Spanish chain, signed the document in the presence of Manuel Marrero, Cuba´s Minister of Tourism, and people invited to the 37th Tourism International Fair, FitCuba 2017, which began today in Holguin.
Jimenez acknowledged the enormous potential existing in this eastern city, which features the Ordoño, Arsenita and Plaza Colon hotels – the latter inaugurated yesterday -, Cubanacan properties now managed by Iberostar.
The executive predicted a successful future and urged tour operators and travel agencies to also include in their programs the offers of the new pole, characterized by a high historical and patrimonial value.