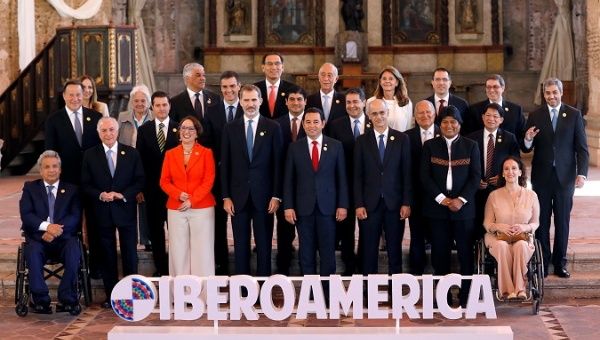 Foreign affairs ministers of the Ibero-American region have released a statement condemning the US blockade on Cuba.

Nov 17 (teleSUR) On Friday, foreign affairs ministers meeting at the 26th Ibero-American Summit of Heads of State and Government that takes place in Guatemala, approved a special statement on the need to end the economic, commercial and financial blockade that the United States imposes on Cuba.

A majority of foreign ministers, present in the run-up to the meeting of the Heads of State, approved the proposal presented by the Cuban delegation headed by Foreign Minister Bruno Rodriguez Parrilla.

The statement admonishes the application of the Helms-Burton Act, which implies an international expansion of the U.S. blockade to countries and organizations that investment in or transact with Cuba.

It also supports the Nov. 1 resolution, adopted during the General Assembly of the United Nations (U.N.), in which 189 countries condemned the blockade against the Caribbean island.

The economic, commercial and financial U.S. blockade imposed on Cuba since 1962 affects all sectors of the Cuban economy resulting in millions of losses, and prevents access to materials, products and services from the international market necessary for the normal development of the island. Cuba estimates that it has lost more than US$930 billion since the beginning of this policy rejected by the international community.

During Friday’s summit meeting of heads of state, Salvadoran President Salvador Sanchez Ceren asked the Ibero-American region to reach consensus on an “ambitious and exemplary” strategy to mitigate the effects of climate change. Asking his counterparts to make a “strong commitment” in order to reach “a planet in better condition for humanity” respecting the environment, where everybody has access to fundamental human rights. “An Ibero-America: prosperous, inclusive and sustainable.”

On the other hand, Peruvian President Martin Vizcarra asked for a strong commitment to the “Eradication of all forms of violence and discrimination against women. It is necessary to promote equality and non-discrimination against women for the prosperity of our peoples.” He highlighted the importance of a joint effort to end “structural inequalities that undermine the institutions, and hinder the development and effective enjoyment of rights.”

The Nicaraguan government, through it’s foreign affairs ministry, attacked interventionism in the region, especially those of Costa Rica against Nicaragua.

“We flatly reject the pro-imperial, arrogant attitude and lack of intelligent or sensitive diplomacy that the president of Costa Rica has exhibited this afternoon in Antigua, Guatemala, showing that ill-educated, meddling, contemptuous, racist, officious and snooping character, that characterize his speech and conduct towards a brother and neighbor Country, and which has never harmed Costa Rica; as well as against Venezuela, and its constitutional government, and its brave and dignified people.”