‘I came back with a lot of questions’: Winona group visits Cuba through Witness for Peace organization 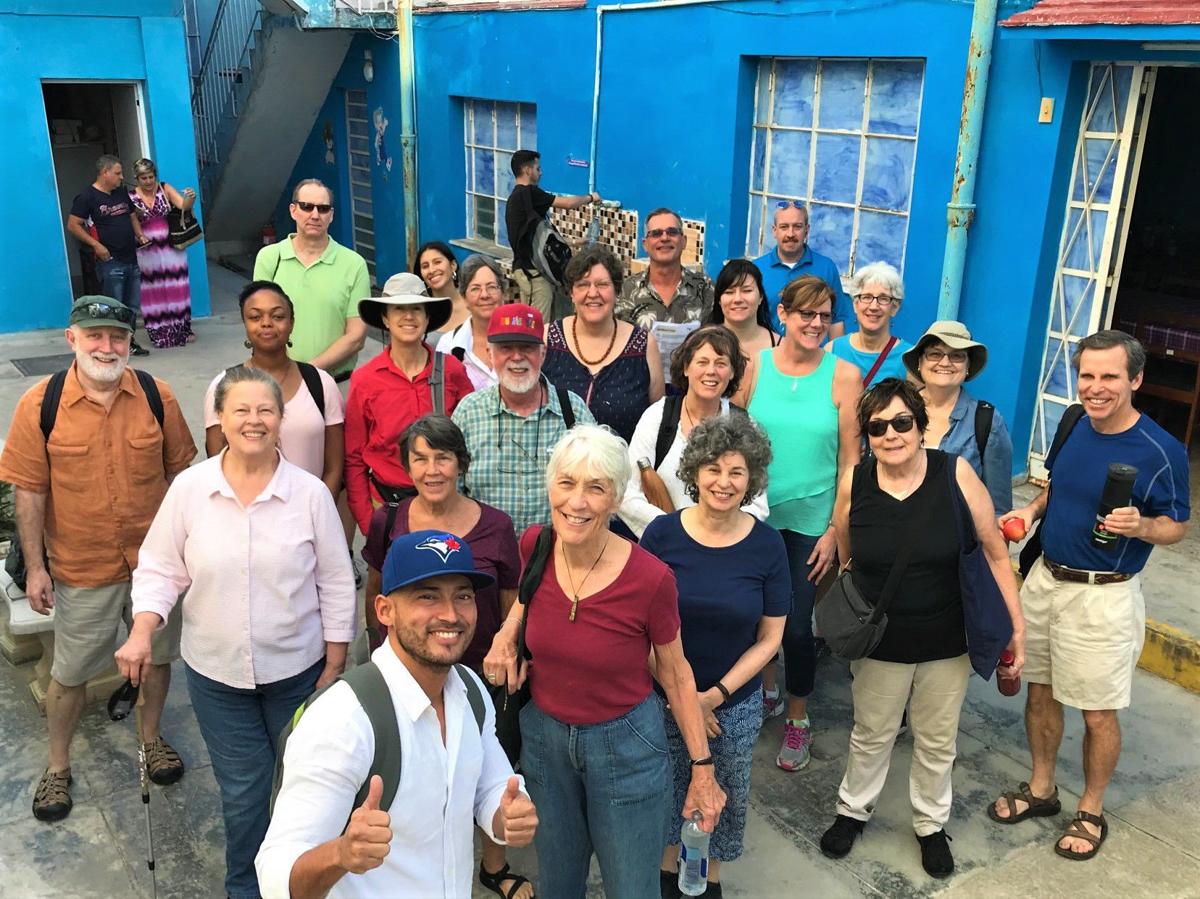 Winona’s Witness for Peace Delegation poses for a picture at the Martin Luther King Jr. Center in Havana, Cuba. The MLK Center was the host organization for Witness For Peace, as required under the People to People visitation program from USA to Cuba. The man is front is Sandor Alvarez Zaldivar, a lawyer, and the group’s MLK Center host. The group spent eight of its 10 nights in Cuba at the center with dorm style rooms, dining room and meeting room. The other two nights were spent at the Bay of Pigs.

With mojitos poured and flan in cups waiting to be tasted, the Winona Arts Center had only two chairs open on Friday as a group of Winona residents shared their experience of going to Cuba.

“It was fantastic,” Mary Kaye Perrin said prior to their presentation. “It was very educational.”

The group of 20-plus had gone on the nine-day trip in February through Witness for Peace — an organization that supports peace, justice and sustainable economies in the Americas by looking at policies and corporate practices that contribute to poverty and oppression in the Latin America and the Caribbean. The group has done numerous presentations on their trip and are planning on a few more presentations in late May, June and August.

They came back with a plethora of information, questions and new perspectives on everything from Cuban culture, education, health care, and effects of the Cuban embargo. The blockade, as it’s called in Cuba, greatly restricts commercial, economic and financial trading with the country, dating back in part as far back as 1958.

The relationship and history of the United States and Cuba is so dense, complicated and significant to both countries that Cherie Hales said her trip only scratched the surface of her craving to understand the situation.

“I came back with a lot of questions,” Hales said.

Michaela Handke, who went with her family, said her perspective on the little things was one of the greatest takeaways for her.

That means both the little things that she’ll learn to cherish more, like consistent water pressure and septic systems, but also the things she realized the United States lacks.

“(Like) the way they have their agriculture set up,” she said. “A lot of their food is organic.”

A big takeaway for Jeanne Handke on the other hand was the lack of student loans and medical cost, since education and healthcare are free in Cuba.

“Any child can be whatever they want,” she said, adding that students from any background can go to college to be doctors without worrying about the financial cost of doing so.

And for Phil Handke, the big takeaway was the lack of racial divide. No matter the skin color or any other difference, Phil said Cubans aren’t self-divided or concerned with their differences like in the United States.

“Cuban people pull together,” Phil said. “They’re all as one.”

Witness for Peace is an organization that supports peace, justice and sustainable economies in the Americas by looking at policies and corporate practices that contribute to poverty and oppression in the Latin America and the Caribbean.