Posted on December 2, 2016 by Anthony Brenner 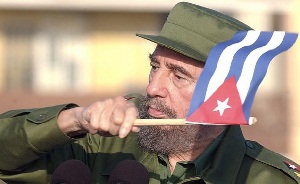 The most maligned man on the planet, who survived more than 600 assassination attempts, the most hated by those who hate sovereign peoples and honest beings; aware of reality and history. There is a before and after Fidel in Latin America and the world. And that, in case someone didn’t want to realize about in the last 50 years, was reaffirmed by the Cuban people packing out the Plaza de la Revolucion and the surrounding streets. There is no way of visual manipulation, of deceitful photographs, the images speak for themselves, there were thousands of older people, young people and children, saying goodbye to the greatest of revolutionaries in recent times.

Neither the worldwide media coverage with all the millions of dollars spent on propaganda to discredit the Cuban Revolution, nor the blockade imposed by the United States, were able to defeat Fidel and his people. What will happen with the Revolution now? Many lackeys wonder, eagerly waiting for the Condor Plan to set foot in Cuba, with the imperial eagle, to go urgently, like birds of prey, to devour the lifeblood of dignity. But the overwhelming response was given last night by the same Cuban people. And it was heart rending! I am Fidel! I am Fidel! I am Fidel!

If they came to believe that the Cuban Revolution together with Fidel had died, they were wrong. Fidel became the blood in the veins of children and young Cubans who have become the sweet fruit of their elders arduous generational struggle. Many lives were lost along the way, none was in vain. In the tribute to Fidel, also a tribute was paid to Camilo and Che Guevara, pillars of a beautiful and sovereign Cuba. So, the life, the honor, the loyalty and the righteousness of a man who by his very existence made a whole empire tremble, is celebrated.

It was soul stirring to feel the love and gratitude of governments of countries in the five continents; they spoke of a friend and brother Fidel. And at home, listening to ours promising the unity of the Great Homeland. Undoubtedly in that tribute, Chavez, Lugo, Néstor, Lula, Dilma and Cristina were missed.

Let it be clear then, that every time someone asks, anywhere in the world, where is Fidel? The answer is to be found in every corner of sovereign Cuba, and in the heart of every human being who fights for the freedom of all people.