How to Book a Flight to Cuba 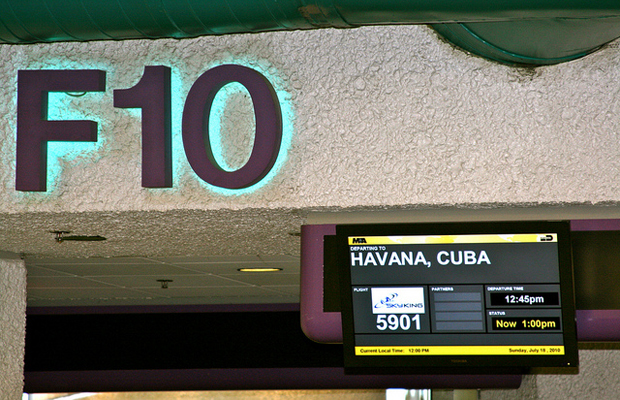 If you’re among the thousands of U.S. Americans who have flocked to Kayak and similar sites to check prices for Cuba flights, you were probably surprised to discover that, well, they’re not there.

While airlines have triumphantly announced new service to the island, and a greater number of Americans are eligible for travel to Cuba than ever in the past 55 years, purchasing a ticket is nowhere close to straightforward. Here’s what you need to know:

As we laid out in our recent overview of the state of travel to Cuba, until terminals and other infrastructure is in place, flights are the only commercial way to get to the country. Let’s take the case of JetBlue, to see how this works. The U.S.-based airline — which has actually been running charter flights to the island since 2011 — launched a direct New York City (JFK) to Havana route on July 3 to great media fanfare. But go to jetblue.com to look up flights, and you’ll find that Havana isn’t even listed as one of the airline’s partner cities.

That’s because JetBlue is still operating all of its Cuba flights through charter companies — meaning that passengers are flying on the airline’s aircraft with the airline’s crews, but all reservations and paperwork are handled by the charters. JetBlue has several charter partnerships, and the one you’ll choose depends on your departure and arrival cities. At present, the JetBlue charter flights include the following routes: New York City’s JFK Airport to Havana (in partnership with Cuba Travel Services); Tampa to Havana and Santa Clara (both with ABC Charters); and Fort Lauderdale to Havana (with Xael; 305-643-2200).

In other words, you’ll have to email or call the charter companies directly to book a flight. Keep in mind, too, that you can’t just book a flight for any day of the week; there are weekly departures for each of these routes, with return flights also scheduled for specific days of the week. And, of course, you’ll have to qualify for one of the 12 approved categories for travel to Cuba.

JetBlue’s a bit coy about showing its cards when it comes to going on record about future gateway cities. But Philip Stewart, the company’s manager of corporate communications, tells us: “Like all JetBlue routes, we are regularly monitoring demand [to Cuba].”

American Airlines also operates charters to Cuba, and it services more destinations than JetBlue, with 21 total flights per week. Beyond these two carriers, travelers can also book directly with charter companies that have a long history of offering flights to Cuba. In addition to the ones mentioned above, Marazul and SkyKing are also reputable options.

When can passengers expect to find flights on the major carriers’ own websites? The answer, says JetBlue’s Stewart, is “when government regulations allow commercial flights between the U.S. and Cuba.” That may not happen for a year or more, as the aviation authorities still have many negotiations to make.

More booking tips: Before you travel, be sure to ask your charter agent about luggage. At present, Cuban Customs (Aduana) permits 44 pounds of luggage and an additional 22 pounds of medication to enter the country without fees. You’ll also want to be sure that what’s in your luggage doesn’t draw unwanted attention; there’s a long list of items, electronics mainly, that can cause major slow-downs upon arrival, and if you’re carrying multiples of certain objects, such as laptops or cameras, you may be obliged to leave them at Customs and retrieve them upon your departure. Speaking of departure, hang onto your visa — you’ll need to present it when exiting the country. There are no exit or departure fees.