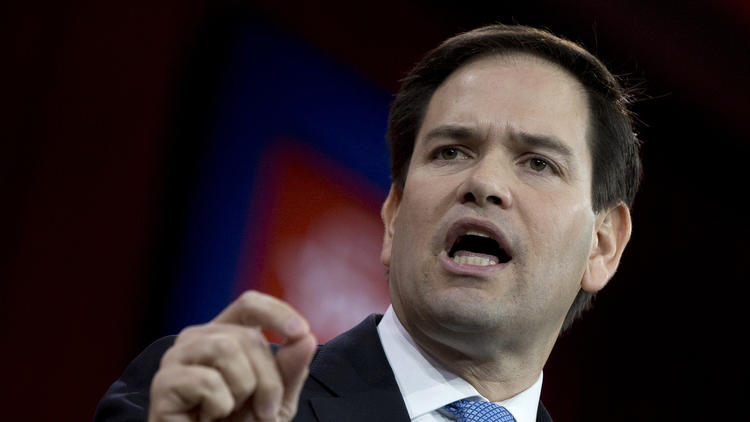 When Marco Rubio was majority whip of the Florida House of Representatives, he used his official position to urge state regulators to grant a real estate license to his brother-in-law, a convicted cocaine trafficker who had been released from prison 20 months earlier, according to records obtained by The Washington Post.

In July 2002, Rubio sent a letter on his official statehouse stationery to the Florida Division of Real Estate, recommending Orlando Cicilia “for licensure without reservation.” The letter, obtained by The Washington Post under the Florida Public Records Act, offers a glimpse of Rubio using his growing political power to assist his troubled brother-in-law and provides new insight into how the young lawmaker intertwined his personal and political lives.

Rubio did not disclose in the letter that Cicilia was married to his sister, Barbara, or that the former cocaine dealer was living at the time in the same West Miami home as Rubio’s parents. He wrote that he had known Cicilia “for over 25 years,” without elaborating.

Rubio has avoided discussing Cicilia’s case in detail and has declined to answer questions about his relationship with his brother-in-law. Earlier this month, prior to The Post publishing an article about Cicilia’s case, Rubio declined to answer a written question about whether he had helped win the approval of his brother-in-law’s real estate license.

Rubio also declined to say whether he or his family received financial assistance from Cicilia, who was convicted in a high-profile 1989 trial of distributing $15 million worth of cocaine. The federal government seized Cicilia’s home; the money has never been found.

Cicilia, 58, could not be reached for comment. He still lives in the same home as Rubio’s mother and has appeared at campaign events for his brother-in-law. Rubio-affiliated PACs and campaigns, including his ongoing presidential operation, have paid Cicilia’s two sons more than $130,000 in the past decade.

“Orlando made some very big mistakes almost 30 years ago, served his time, and has paid his debt to society,” Rubio’s presidential campaign adviser, Todd Harris, said in an email. “Today he is a private citizen, husband and father, simply trying to make a living. It is appalling and shameful that The Washington Post continues to drag him into the spotlight.

“Marco has recommended scores of Floridians for various professional positions and after Orlando paid his debt to society, Marco was happy to recommend him as well. He believed Orlando should be judged on his own merits and felt it would be highly inappropriate, and could be perceived as exerting undue pressure, if his letter stated that Orlando was a relative.”

“Someone who serves their time should be a productive member of society, and it’s important for families to help each other, but it’s wrong to use your public office for personal or private gain,” Brian said.

By not disclosing his relationship, Rubio withheld a key piece of information from the real estate board, Brian added. “The general rule of thumb I apply to conflicts of interest is, if you can’t eliminate them, you need to manage them by disclosing the conflict,” she said. “I’m uncomfortable that he didn’t acknowledge the conflict.”

Rubio, a Republican who represents Florida in the U.S. Senate, was a 16-year-old high school junior in 1987 when Cicilia was arrested in one of the largest drug cases in Florida history. There has never been any evidence that Rubio or his family knew that Cicilia was dealing cocaine, although Drug Enforcement Administration surveillance records show Cicilia stored cocaine from the drug ring at his home, a few miles away from where Rubio and his parents lived.

By 2002 — when Cicilia applied for his real estate license — Rubio was accumulating significant power in Tallahassee. He had been tapped as majority whip, and he added to his growing portfolio when he was named chairman of the prominent Task Force on Florida’s Tax Structure. Later that year, he was selected as House majority leader, a position that put him on the fast track to become speaker of the House.

While Rubio was making his mark in Florida politics, Cicilia was reintegrating into the Rubio family and acclimating to life as a free man after 11 1/2 years in federal prison. Cicilia lived with his wife and Rubio’s parents in the future GOP candidate’s childhood home, according to Cicilia’s real-estate-license application. Shortly after his release, Cicilia took a job on the sales staff of a Miami food company and worked his way up to be head of the sales team, according to his application.

Cicilia’s cocaine conviction presented a complication for his application. Unlike some states, Florida does not prohibit felons from holding real estate licenses. Their applications are considered on a “case-by-case basis” by seven members of the Florida Real Estate Commission, who are appointed by the governor. The governor, at that time, was Rubio’s political mentor, Jeb Bush — who is now running against the Florida senator for the Republican presidential nomination. The budget of the agency is controlled by the Florida legislature, where Rubio wielded considerable influence.

Cicilia had one technical issue in his favor. In general, the board frowns upon applicants who have been convicted of fraud and related charges — he had been convicted in a drug trafficking case. Regardless of the charge, felons can plead their cases before the board members and can ask character witnesses to submit letters or testify on their behalf.

“If someone has been found guilty of fraud, that’s going to go against them,” said Chelsea Eagle, a spokeswoman for the Florida Department of Business and Professional Regulation, which oversees licensing in the state. “It all depends on the circumstances of the case.”

Cicilia applied for his license in February 2002, and he answered “yes” to a question about whether he had been convicted of a crime. State regulators wanted to know more. Cicilia responded on June 5, outlining his cocaine conviction and sentencing, and saying he had an “impeccable record” during his time in prison.

At the suggestion of an official in the Florida Division of Real Estate, Cicilia asked for his application to be considered at a hearing of the Real Estate Commission in July 2002. Along with his request, he sent three recommendation letters. One was from a real estate executive who said he had known him for 30 years; another was from his boss at the food sales company, who described him as “efficient, punctual, meticulous in his work and in every way a model employee.” The third was from the majority whip of the Florida House of Representatives — his brother-in-law.

“I have known Mr. Cicilia for over 25 years,” Rubio wrote in a July 1, 2002, letter to an official in the Real Estate Division of the Florida Department of Business and Professional Regulation. “I recommend him for licensure without reservation. If I can be of further assistance on this matter, please do not hesitate to contact me directly.”

Cicilia got his hearing. A letter from the Real Estate Division let him know that his application was placed on the agenda for the Real Estate Commission’s July 17, 2002, meeting.

The next day, he was approved. He was officially a real estate agent.

Three years later, when Rubio was looking for a new home, he turned to the real estate agent in the family to help him arrange the purchase: Orlando Cicilia.

By Scott Higham and Manuel Roig-Franzia