How Cubans Made Flan Their Own 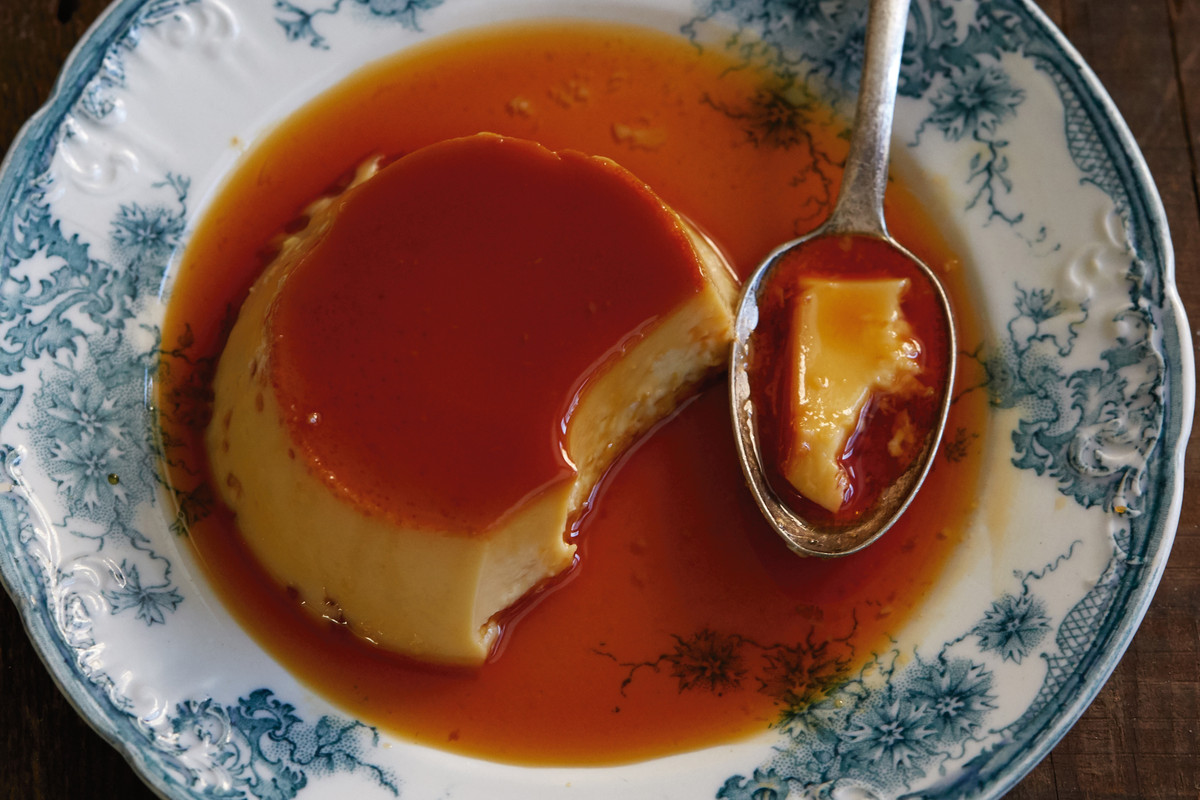 From the new book, ‘Paladares: Recipes Inspired by the Private Restaurants of Cuba’

Few desserts are as synonymous with Latin culture as flan, the soft caramel custard that’s served everywhere from Mexico to the Caribbean. In Cuba, where restaurant owners struggle to obtain a consistent supply of fresh food, “flan is something they almost always have the ingredients for,” says author and photographer Megan Fawn Schlow. Her new book, Paladares: Recipes Inspired by the Private Restaurants of Cuba, written with Anya von Bremzen, details the lengths to which the owners of paladares will go to adapt traditional recipes.

Though flan is made with fresh milk in Mexico and much of central America, in Cuba, it’s made with evaporated and condensed milk from cans. The canned dairy is more economical, but as Schlow notes, essential because in Cuba “fresh milk is usually reserved for kids under the age of seven.” As an added bonus, the evaporated and condensed milks yield a thicker, creamier custard.

“Cuban grandmothers tell me that’s how they remember making it at home too,” Schlow says, noting that the use of tinned milk is a longstanding tradition, not a newfound tweak. “Today, you’ll find people making individual flans at home in empty soda cans that have been cut in half, because that’s what they have,” Schlow says, “and because many home kitchens don’t have ovens, a lot of people make their flan in a bain marie on the stovetop.”

As for the other ingredients, sugar is the island’s chief export, and eggs are plentiful — either at the market or in a neighbor’s chicken coop. Vanilla might be hard to come by, but paladares thrive on the generosity of tourists and visitors who might gift a small, precious bottle to the proprietor on their way in or out of town. Here, based on Schlow’s travels through the island, is a traditional recipe for Cuban flan, below.

Of all the rich, eggy custards perfected by nuns in medieval Spanish Catholic convents then exported to the New World, flan became by far the most popular Latin dessert. In Cuba, flan soaked in dark caramel is as essential and classic as black beans and rice. But because cows — and therefore milk and cream — are so scarce, Cuban cooks resort to canned condensed and evaporated milks, which is actually pretty traditional. It’s also quite a boon! Condensed milk offers the added bonus of stabilizing the custard and preventing the dreaded curdling. It also makes for a denser, creamier flan — which is exactly how most Cubans like it. This straightforward version is a rich, silken perfection but it requires a pretty dark caramel to offset the sweetness. Watch closely so it doesn’t burn.

2. Melt the sugar in a saucepan over medium heat, stirring frequently, until it turns into a dark caramel, 9 to 10 minutes. (Watch closely during the last few minutes to make sure it does not burn.) Swirl the pan after you remove the caramel from the heat, as it will keep cooking. Pour about 2 tablespoons of the caramel in each of six ó-cup (120-ml) ramekins and set them in a baking dish with high sides.

3. In a mixing bowl, combine the condensed milk, evaporated milk, whole eggs, egg yolks, and vanilla and whisk to combine. Divide the custard mixture evenly into the prepared ramekins. Fill the baking dish with warm water halfway up the sides of the ramekins and gently place the pan in the oven.

4. Bake the flan for 12 to 15 minutes, or until the centers jiggle slightly when shaken. Let the ramekins cool in the water bath, then refrigerate for at least 2 hours. When ready to serve, run a paring knife around the edge of the ramekin, place a plate over the top, and invert the ramekin, shaking it a bit to release the flan onto the plate. Liquid caramel will drip down the sides of the flan.