How Are Cuba’s Leaders Chosen? 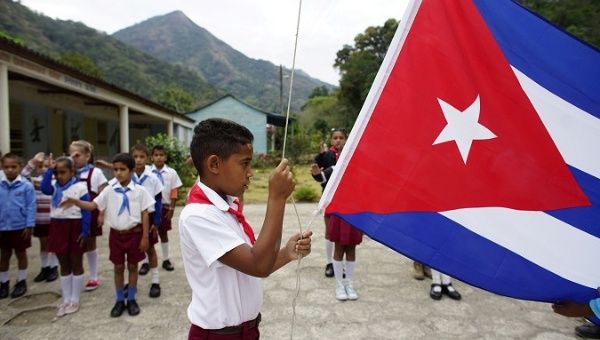 A boy raises the Cuban flag during a daily ceremony held at a school in the village of Santo Domingo, in the Sierra Maestra, Cuba, April 2, 2018. | Photo: Reuters

Much of the world’s media has taken it upon itself to mislead readers and obscure Cuba’s democracy while presenting little of substance to explain the process.

April 17 (teleSUR) As Cuba prepares to start its national assembly session where a new president will be elected to succeed Raul Castro, it is important to review the country’s election process and expose many of the misunderstandings about how exactly the Caribbean island’s election system works.

The new national assembly of 605 representatives recently elected in the popular democratic March 11 election will meet Wednesday to choose the next president, first vice president, five vice presidents and 23 members of the State Council.

The Cuban constitution guarantees that the sole political power in the country is that of the people, represented at the national level through the National Assembly. Legislators in the National Assembly are not professional politicians, as in many other countries. Rather, they normally continue to work in their respective occupations in addition to carrying out legislative duties without pay. The Assembly is well known for having one of the most equal gender representation ratios of any parliament in the world, with the current body being 48 percent women.

Representatives can be recalled at any point.

The president is significantly less powerful in Cuba than most mainstream media tends to portray. They are prohibited from making decisions alone, as all decisions must be discussed and approved by the State Council, and the State Council is accountable in all actions to the National Assembly, which is in turn accountable to local assemblies.

First, municipal assemblies are elected. Candidates are selected during nomination assemblies in each local area, which are typically attended by 70 to 90 percent of the electorate. The local assemblies were formally elected last November.

The municipal assemblies then appoint candidates from each municipality to be selected as representatives at the provincial level.

The next process is arriving at a list of the National Assembly’s 605 candidates.

Around 50 percent of the candidates for national assembly are appointed by the recently elected municipal assemblies, in order to ensure that every region receives representation at the national level.

The other 50 percent of the pre-candidates for the National Assembly are selected from a list of suggestions put forward by plenums held by mass organizations and trade unions around the country. Possible pre-candidates typically number in the thousands.

The 605 final candidates are then put to a national vote of the people, where they must be approved by the majority to be approved for the Assembly. Should they fail to achieve 50 percent, a different candidate must be put forward in their place. This is what will take place on March 11.

The right to vote in Cuba is granted to all citizens and permanent residents of Cuba who have reached 16 years of age, and who are not currently under legal probation or determined mentally unfit to vote.

The vote is free, equal and secret, and each voter is granted one vote as guaranteed in the constitution. The vote is voluntary and nobody can be legally sanctioned for not participating. Voters must present identification, and in the case of illness or inability to go to polls, an auxiliary may be approved to vote in their place.

No Parties, Money, Lobbying or Campaigns?

A visitor to Cuba in the weeks leading up to the elections would notice something that might initially strike them as odd: there are no campaign advertisements, no rallies, no interest peddling, or any of the other expected signs of “election season” familiar to most countries.

That’s because in Cuba, candidates are prohibited from raising or using any money to promote themselves. Candidates are selected and voted on based on experience and leadership in the community, not business or money interests. They are only allowed to represent themselves and their history as leaders, and, although they might be members, they cannot represent any political party, including the Communist Party.

Contrary to the familiar party-based model, elections in Cuba are based on the merit of the candidates. The Communist Party, while serving as the leading, unifying party of the country, is not allowed to endorse or appoint any candidate.

Much of the world’s media has taken it upon itself to deliberately mislead readers and obscure Cuba’s democracy, using words like “one-party rule” and “political dynasty,” while presenting little of substance to explain the process.

These caricatures of how political representation function in Cuba’s socialist system serve to hide from the world one of the most direct participatory processes in the modern world, preventing many from understanding how a Caribbean island is pushing popular power forward.