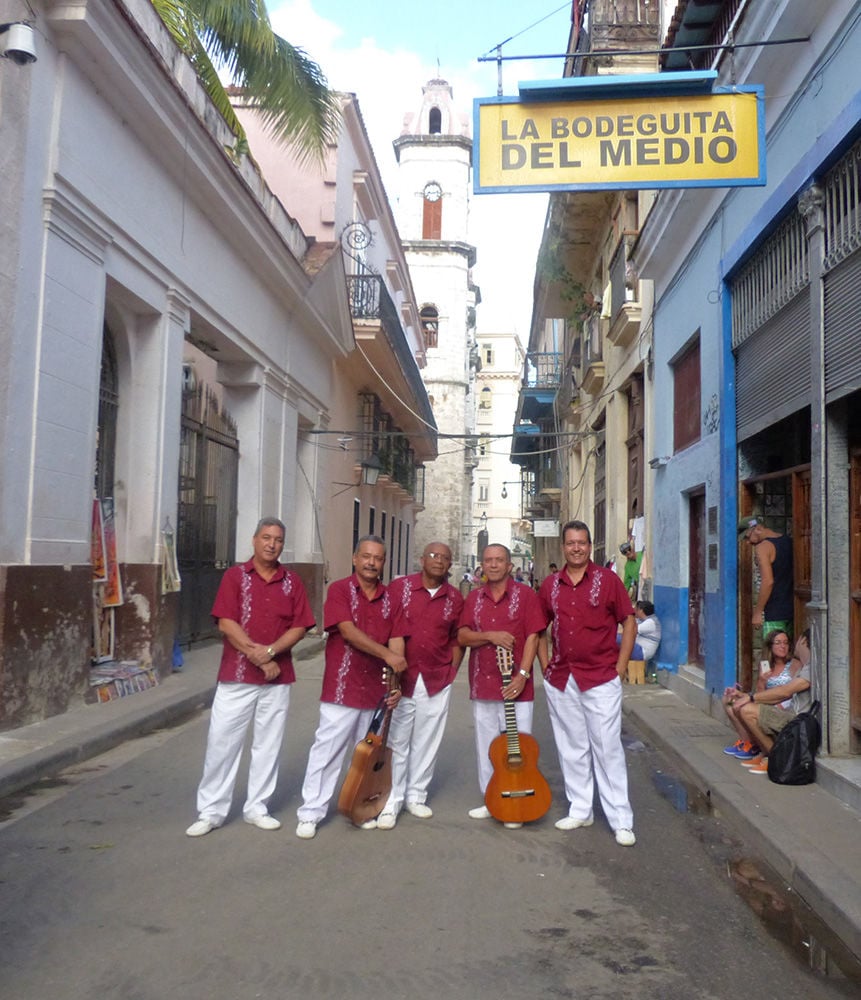 The popular traditional music of Cuba is fun and engaging and often rambunctious, but it is not simple to describe. “There are various names for the traditional Cuban music that has roots in Spain and Africa, and many of them originated in eastern Cuba,” said Miguel Delgado, originator of the 20-year-old group TradiSon. “We have son, bolero, changüí, guaracha — the guaracha is usually a little faster than the son and usually the lyric is humorous. And son montuno, which is the mountain, country son. There’s also punto guajiro and danzón, which is from the European influence in the 1890s and early 1900s; and, from the Isla de la Juventud, sucu-sucu music.”

TradiSon is firmly grounded in son, the eminently danceable Cuban variety of Afro-Latin music, but the band wanders into many of these related styles, and even performs The Beatles’ “A Hard Day’s Night,” according to Stuart Ashman, who with his wife, Peggy Gaustad, and Santa Fe resident John Vasquez brings TradiSon for a series of concerts as part of the 2017 Santa Fe International Folk Art Market. Ashman, who is currently the director of the Center for Contemporary Arts, grew up in Cuba and acted as translator in a recent interview with Delgado.

“They interpret the music of other authors, but there will be a few new songs that are on their new album that they will inaugurate for their concert on the Plaza,” Ashman said. “They do some songs by Polo Montañez, who basically redefined the music of western Cuba. We heard him play 25 years ago in some little thatched-roof restaurant and he was unbelievable. The one thing that characterizes all of the types of Cuban music is the rhythm and it derives from African drumming, which is very complex. That Cuban rhythm is unique. If you turn the radio on and you hear Latin music, you can tell what’s Cuban and what isn’t right away.”

Son fundamentally evolved from the marriage of African rhythm and Spanish guitar. Those cultural flavors reflect the fact that Cuba was “discovered” in 1492 during the Spain-sponsored voyages of Christopher Columbus and was then a Spanish colony for centuries, and the fact that Spain transported large numbers of African slaves to Cuba for the purpose of exploiting the island’s sugar and coffee resources. Ashman related an interesting story that refers back to the United States’ role in Cuba’s 1898 independence. It has to do with the origin of the punto guajiro name. “Guajiro is the word for someone from the country, and that music genre is more improvisational. I was just at a wedding in Cuba and the father is a punto guajiro singer and he got up there and sang a phrase about the wedding; it’s sort of like the American talking blues. It’s very sweet and simple, but it has evolved to have a lot of improvisation.” He said the guajiros are the only group in Cuba that have archaeological sites related to the Taino Indians and that the people have facial features resembling those of Apache or Navajo Indians in the American Southwest, along with unique musical and culinary traditions. “There is lore that in the 1860s, when the Cubans first revolted against the Spanish and the U.S. Marines were there, these guajiros were coming down from the mountains and the Marines said, ‘What the hell is that?’ and they were answered, ‘Those are war heroes.’ ” (That term sounds quite like the Spanish pronunciation of “guajiros.”)

Punto guajiro is one of the Cuban genres that features the tres, a guitar that has three pairs of strings, each pair tuned to the same note but an octave apart. It is a difficult instrument to master, and the players often wax improvisational. The tres is Delgado’s instrument. The other members of TradiSon are Guillermo Linares, bass and song arrangements; Gilberto “Cuquito” Noriega, vocals; Amaury Rodriguez, percussion and vocals; and Benito “El Beny” Torres, guitar. Delgado said all of the musicians, who hail from San Antonio de los Baños and Guira de Melena, about 20 miles south of Havana, started playing music seriously at about age twelve.

Ashman emphasized that there are all kinds of music in Cuba. “Flute and cello are both important instruments. In eastern Cuba, they have the Cuban marimba [marímbula], which is like a giant version of the the African thumb piano and serves as the bass instrument. Then they have the chequeré, a gourd with beads on a macramé net. On the jazz end, you have Chucho Valdés and the Afro-Cuban All Stars, and every municipality has a professional choir and they all sing Cuban numbers as well as baroque music.  A lot of the Cuban musicians you hear in bars and clubs there are classically trained. You’ll see buskers on the street and they really, really know how to play.”

“Everybody grows up hearing these songs and learning to play and sing the songs. It’s a very musical country,” said Gaustad, who has made 16 trips to Cuba since 2012 for the Folk Art Alliance. She and her husband first brought TradiSon to Santa Fe for the 10th anniversary of the International Folk Art Market. “Way back in 2009, I went with the then-directors of the market, Judy Espinar and Charlene Cerny, because we wanted Cuba to be part of the market. We wanted to see what was available, what was happening in Cuba, folk art-wise, and because of the embargo what we could bring. I knew the one thing we could do on that initial trip was find a band to bring to the next year’s market.

“I remember that Judy said when we landed, ‘How will we find a band?’ I said there’s music everywhere and when I hear it, I’ll know it.” The Santa Feans were in Cuba at the invitation of the nation’s ministry of culture, and one day, representatives of the ministry took them to lunch at La Bodeguita del Medio, the Havana club that is renowned as having been a favorite haunt of Ernest Hemingway. “When the band started playing, I said, ‘I think this is it.’ That was TradiSon, and I said to them, ‘We’re going to bring you to Santa Fe in July.’ The lead singer, who’s this kind of crusty older guy, looked at me like, How many inebriated tourists have said something like that to me? He was not the least bit moved by my statement. Now they’ve all become really good friends. When they came in 2010, Stuart was still secretary of cultural affairs for Governor Bill Richardson, and Stuart basically became their driver for the weekend. I think it was the first time since he left Cuba when he was twelve that he was just hanging out with five of these guys, and he was in heaven.”

“These guys know a lot of songs,” Ashman said, “and they arrange everything to their instruments and to their voices. Their harmonies are impeccable. If they interpret a guy like Carlos Puebla, who was the premier writer of political folk music — but who was very loyal to the revolution — they’re talking about a song called ‘Hasta Siempre, Comandante,’ an homage to Che Guevara. That is always requested by tourists, as are ‘Cha Cha Cha’ and ‘Guantanamera.’ ”

After the mention of Puebla, we asked Delgado if TradiSon sometimes sings songs with lyrics that are political. No, he answered, their music is more about fun. “So that people will feel good and because of that, we feel good.”