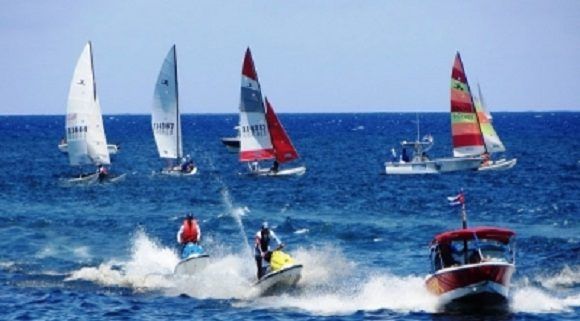 Havana, Cuba, May 19 (acn) The International Hemingway Nautical Club began an attractive competitive regatta several kilometers north of Havana’s coasts as part of activities on the occasion of its 25 th anniversary.

The population enjoyed the regatta, with the participation of 40 light sailing vessels and 30 motor sails in addition to 50 participants of the kitesurfing modality.

The Commodore of the International Hemingway Nautical Club, Jose Miguel Diaz Escrich told ACN, hat despite the bad weather conditions on Friday morning, the club which began the nautical rally on January 5th continued as scheduled.

All of the vessels went to the sea despite the bad weather, which provoked the withdrawal of several of the 50 athletes that initiated the kitesurfing, but it was a beautiful scene, said Diaz Escrich.

We still have a lot to do in nautical sports and the nautical-recreational modality for our friends to enjoy after so many rallies so far this year. The club now will recess and later reinitiate its activities with a competition of velocity and attempts to break the current record.

This competition will start in Key West to Havana, rest for one hour and then return to the US city, probably in the second semester of this year, said Escrich.