Health givers’ wages will be raised

HAVANA — The Cuban president, Army Gen. Raúl Castro Ruz, officially announced that the wages for the health sector will be increased. Without giving specifics on the amount of the raises or the date on which they’ll be applied (according to reliable sources, the date “is around the corner”), Castro explained that the decision corresponds to the contributions in hard currency to Cuba made by the thousands of doctors, paramedics and technicians who work overseas. 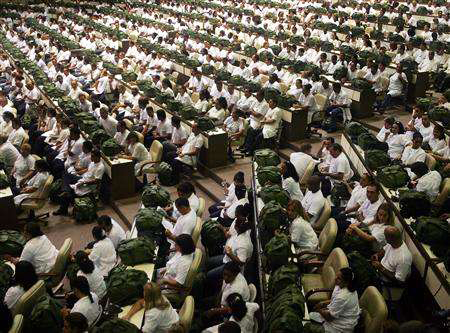 The Cuban president made the announcement during a speech closing the 20th Congress of the Cuban Workers Central (CTC). He made it very clear that the policy of raising wages without support would create inflation and impoverish numerous citizens, as is happening in developed countries. Cuba will not apply neoliberal shock measures, Castro emphasized, adding that “in order to distribute wealth, we first have to create it.”

His speech, barely 30 minutes in length, touched on fundamental issues for the Cuban labor movement, closely linked to the development of the national economy and the application of the Guidelines approved during the Sixth Congress of the Communist Party of Cuba (CPC). According to the president, this congress had an advantage over the previous ones: it worked on the basis of the Guidelines.

While the CTC Congress supported the updating of the economic model that is being executed in the country, it criticized the slowness in the application of the changes on the productive bases, Raúl said. He agreed with the opinion that the existing wage system is inconsistent with the socialist postulates.

The wages don’t satisfy people’s needs; they fail to motivate them and creates an exodus of workers toward better-paid activities, he said. The income of 1.7 million retirees is not sufficient, he noted.

Elsewhere in his speech, Castro stated that, while non-state forms of management produce greater wages for the self-employed workers, the state enterprise will continue to be the principal form, especially in strategic sectors.

The president insisted on the need to encourage and attract foreign investment and repeated that the new law on investments will be submitted to Parliament next March. By confirming the date of the Assembly’s opening, he rebutted rumors that it had been postponed until May.

The situation afflicting Venezuela and its government was another subject broached by the maximum leader. He said that the crisis responds to foreign interests and mentioned the United States and other Western countries as its sponsors. Expanding on the subject, he invited the delegates to the Congress to read the directives for war actions of that type issued by Washington in 2010.

As an example of the application of that design, he mentioned recent events in Libya, Syria and now Ukraine and Venezuela.