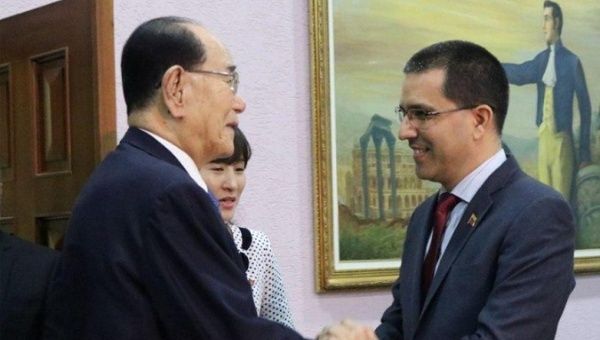 Kim Yong-nam will also visit Cuba and participate in the swearing-in ceremony of Mexico’s AMLO.

Nov 27 (teleSUR) Kim Yong-nam, the President of the Supreme People’s Assembly of the People’s Republic of Korea, most commonly known as North Korea, arrived in Venezuela Monday.

Venezuela is Kim’s first stop in a South American tour that will take him to Cuba and Mexico.

The North Korean leader’s visit has “the goal of strengthening bonds of mutual cooperation in economic and commercial matters, as well as in diplomatic relations.” He is expected to meet with Venezuelan President Nicolas Maduro Tuesday.

The official visit is the result of recent diplomatic efforts.

In March of this year, North Korea expressed its “support and solidarity” for the Bolivarian Government of Venezuela. In September, Arreaza started a process to deepen diplomatic relations through a meeting with his North Korean counterpart Ri Yong Ho in New York, during the United Nations General Assembly.

Kim and a delegation of North Korean officials will participate in the swearing-in ceremony of the newly elected Mexican president, Andres Manuel Lopez Obrador this Saturday.

In Cuba, he is scheduled to meet with President Miguel Diaz-Canel, who visited the People’s Republic of Korea in early November.