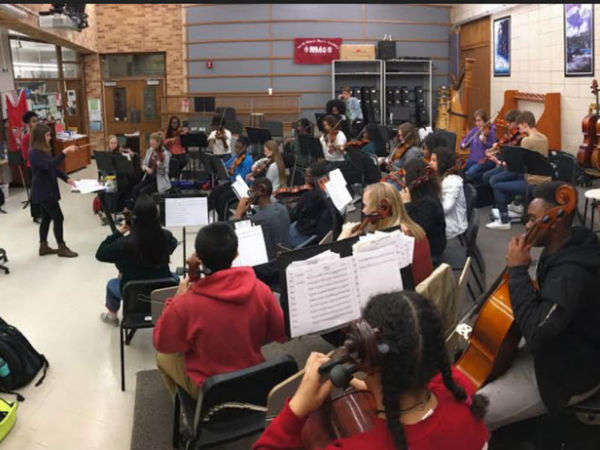 The orchestra at Homewood-Flossmoor High School will become one of the first school groups to visit Cuba when they travel there in 2018.

HOMEWOOD, IL — The orchestra at Homewood-Flossmoor High School will become one of the first Chicagoland school group to visit Cuba when the spend eight days in two of the country’s most significant cities next March.

“It’s a very unique thing,” said B.J. Engrav, the orchestra director at H-F. “Cuba is about to undergo some pretty significant changes, becoming more commercialized, so it will be interesting for our kids to see things before they change.”

The musical entities at H-F — the orchestra, band and chorus — are on a three-year rotation for embarking on an international trip.

The 2017-18 school year will be the 48th year of travel at H-F, Engrav said. The program sponsored by the HFFPAC has recently sent the band to Greece, the choir to Central Europe and the orchestra to Spain. In all, H-F musical groups have visited more than 20 countries on five continents.

But never Cuba. That wouldn’t be a possibility until the United States lifted its travel restrictions to the nation 90 miles south of Miami in 2016.

“It’s quite exciting,” Engrav said. “We are going to be the first group at H-F to go and it’s something we are all going to remember forever.”

The Cuba trip is something Engrav immediately thought of once the accessibility was there. Before, anyone going to the country would need to board a charter flight from Miami, but now major airlines like American and United have flights there.

Engrav said the country’s stronghold in music and cultural history — as well as the fact that nobody has gone there — made it a logical No. 1 choice for international trip 2018.

Once there, the orchestra will play concerts at venues in both Havana and Santa Clara. They will also spend one day as part of a workshop and may have a joint concert with some of the local orchestras there.

The country has produced great musicians, as Engrav evidenced when the orchestra went to Spain two years ago and saw many talented Cuban musicians play there. It’s also safe, Engrav said.

“We always strive for the best cultural experience on these trips, but need to keep in the safety factor as well,” he said. “And Cuba is a very safe place to visit now.”

Until March 2018, students and families will work to raise funds for the trip. A community auction will also be held to help pay for the trip, which Engrav estimates 55-65 students will take part.

“It will be a window into the world from an educational standpoint,” he said.