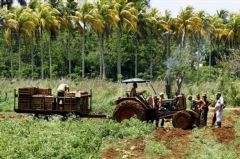 A broad coalition of industry leaders will be in Washington, DC this week encouraging lawmakers to lift the trade embargo with Cuba.

Minnesota Soybean Research and Promotion Council Director Paul Simonsen is among the more than 100 people from across the country making the trip.

“Obviously trade with Cuba is going to come, it’s just a matter of time.  But there are some major hurdles yet, and it doesn’t look like (lifting the embargo) would pass this year.  The administration is supportive of it, but the Congress; both House and Senate…there wouldn’t be enough support there right now.”

He tells Brownfield some lawmakers are hesitant to lift the embargo because of economic conditions in Cuba.

“Cuba is a poor country, and the countries that they are trading with are able to supply credit (to Cuba).  Our exports down there will be limited until we can develop some form of credit line to them as well.”

Simonsen, who visited Cuba earlier this year, says lifting the trade embargo would likely result in increased export opportunities for agricultural products like soybeans and poultry.