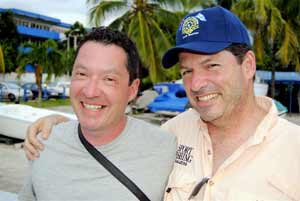 The grandchildren of the novelist Ernest Hemingway, John and Patrick, now reach the International Yacht Club with the name of his grandfather, in times of boom and marine recreation here rapprochement between Cubans and Americans.

At noon on Friday, Commodore of the club, Jose Miguel Diaz Escrich, will welcome them both, in time for the race for Bone Island (21 to 26 May) from Sarasota, Florida, just when just concluded May 21 Challenge starting Havana Key West.

Excellent season for the Cuban tourism and recreational boating, as they see the sector authorities, interpreted as bit in the relations between the US and Cuba.

Both were in September 2014 in the archipelago and were very pleased with their contacts with the locals and the marine world in this country, as they recognized this reporter.

The reason for that trip was to celebrate in Cuba 60 years of the Nobel Prize for Literature for his grandfather (1954) and 80 of the purchase of the yacht Pilar, now perched on a dry pool Hemingway Museum at Finca La Vigía, San Francisco de Paula (house purchased by the author in 1939)

Writer grandchildren were at that time the condition of Honor Members of the International Club of Cuba Hemingway hands of Commodore Diaz Escrich, principal animator of recreational boating in this country.

At that time they came as part of a team of 16 favorable to the protection of marine species in the Straits of Florida US.

John and Patrick then declared their support to the friendship between Cubans and Americans, element considered as a starting point for a future when they stated that there is much to learn from Cuba by the United States.

Now they can participate in the 65th edition of International Fishing Tournament of the Needle Ernest Hemingway (25 to 30 May), one of the events of his oldest guy in the world, and where they are already enrolled 10 boats northern neighbor approved by the Treasury Department.