Going ‘Home’ To A Place They’ve Never Been: Cuba 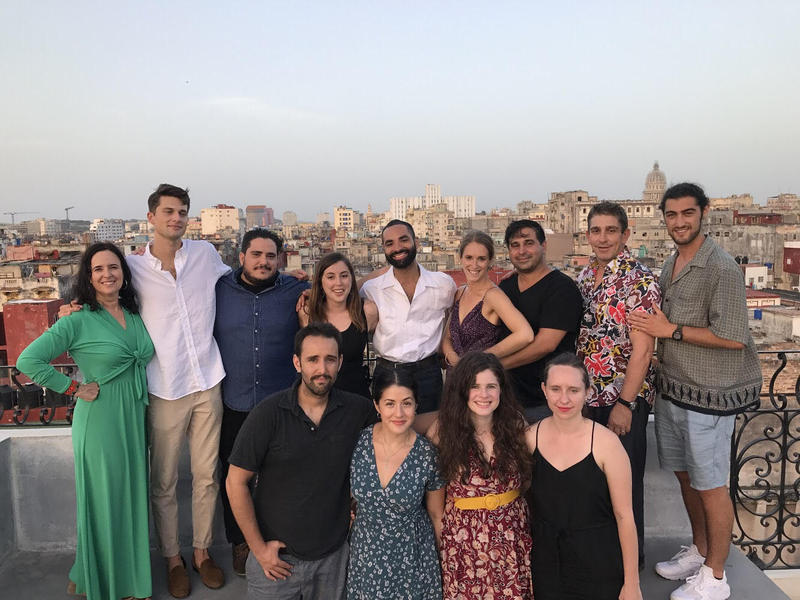 The CubaOne group was made up of writers, poets, anthropologists, filmmakers and other artists. Poet Richard Blanco and writer Ruth Behar led the group on cultural excursions around the island. | CubaOne

For a lot of first-generation Cuban-Americans, Cuba is almost a myth. Grandparents talk about it at family gatherings, always insisting the music, the beaches and even the sugar was better there.

For the first time in their lives, a group of Cuban-Americans got to make their own associations with the island and retrace their ancestors’ steps on a CubaOne Foundation literary trip to the country.

The group of 11, made up of writers, poets, journalists and other artists, spent five days exploring a place that felt oddly familiar for many of them.

But before the plane even took off from Miami, the travelers were full of nerves.

Filmmaker and comic book writer Michael Ruiz-Unger, 31, couldn’t even eat because of how nervous he was.

“I have some anxiety about it. I mean, I never thought I would ever go,” he said at a dinner the night before the trip.

He said he didn’t want to have expectations; he just wanted to take it all in and have his own Cuba experience. Before leaving, he imagined Cuba as many do — as almost inanimate — a line of brightly colored cars, a balcony with potted plants, a woman in a headwrap.

“Like your little grandma’s fridge magnet with an alleyway of Havana Vieja, you know? That’s what I thought of,” he said.

What he discovered instead was a dynamic, alive Cuba. Ruiz-Unger said he was enamored with the farmland and the Cuban countryside. He would sit in the back of the bus and reflect on his experiences as the group drove through the open fields.

One of the overarching goals of CubaOne trips is to create personal and professional tethers between young people on the island and in the United States. Ruiz-Unger was able to form partnerships that would allow him to create an anthology upon his return.

For a lot of the first-timers, the trip was artistically significant.

Playwright Stephanie Swirsky said the trip helped her fully embrace her Cuban identity and gave her the permission she felt she needed to write about characters affected by a diaspora.

Another traveler, Alex Fumero, who works in creative development for HBO and is the author of “Hialeah Haikus,” is compiling another collection of poetry called “Havana Haikus,” inspired by the island.

But beyond just injecting life into the work of these creatives, the trip was also a whirlwind of emotions. Many of the participants knew bits and pieces of the trauma their family members experienced as refugees and exiles, and that along with the joy of returning “home” would come pangs of intergenerational pain.

Anthropologist and professor Kelsie Aguilera knew what was coming her way on her first trip to Cuba.

“I’m sure it’s going to be a lot of different emotions so I’m just anxious for it all, but excited,” she said on the night before the trip.

As an anthropologist, Aguilera said she was “skeptical” of the way Cuba was portrayed in American media. She wanted to see it for herself.

For the participants, it was past and present merging together – they were sorting through their relatives’ memories and pain and then shaping their own perceptions of Cuba in 2017.

One of the trip leaders, poet Richard Blanco, said that’s what this pilgrimage was all about: reconnecting with the physical landscape that inspired these families’ emotional geography.

“You need to actually feel the stuff; you need to witness it through your senses,” he said. “You need to smell that burning sugarcane. You need to taste that pork that does really taste much better — and it’s not just a fairytale, it does taste better — and that coffee that tastes better and all this stuff that your parents remember, not just emotionally, but they had lost the physical-ness of it.”

On the last day of the trip, the organizers gave Aguilera a 100-peso note that had the image of her great-great grandfather, Francisco Vicente Aguilera, who helped free Cuba from Spanish rule. She had only ever seen the note in photos.

This was her full-circle moment, and she said it was the moment she let herself feel those complicated emotions of reclaiming her Cuban roots. And although she teaches at the University of Hawaii, thousands of miles from Cuba, Aguilera says she can’t wait to return.

Aguilera said once she returns home to her island, Oahu, she’ll frame and hang the memento from her family’s island.