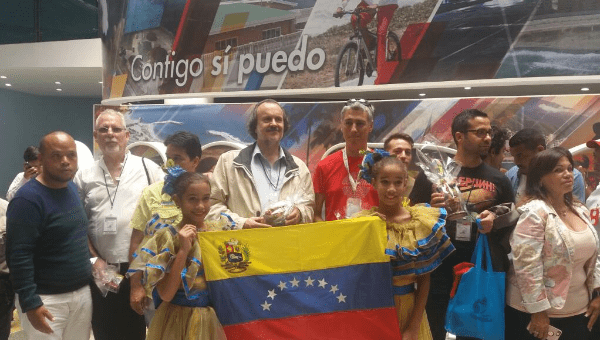 Representatives of from social groups have been visiting projects in Venezuela | Photo: @MPComunas

“We have tried to see the reality through the encounter with the people and their leaders,” Nino Pagliccia.

Nino Pagliccia, a representative from Canada’s Hugo Chávez Peoples Defence Front, joined 14 companions for a tour of several works built by the government in Vargas state.

They also learned about socio-productive experiences and social organization

“We have tried to see the reality through the encounter with the people and their leaders, and we saw, for example, on new buildings made for the needy, which gives us hope that the Bolivarian Revolution is following the direction marked by Chávez, “said Pagliccia.

“It is clear that the lies about Venezuela are completely fabricated, so it is good that we have come to see clearly, and then give testimony of the concrete actions of how society is organized, its level of democracy, consultations and popular participation in action , which is not seen every day in Canada, for example,” said Mary Boti, representative of the Montreal Women’s International Movement.

While Giugliano Granatto, of the Italian Movement Power to the People of Naples said: “I have seen a decent people who want to fight, who are not tired, and despite the obstacles wants to build socialism.”

He added that the most valuable legacy of the Bolivarian Revolution is participatory and protagonist democracy. International activists also pledged to promote global solidarity with Venezuela.

The Minister for the Communes and Social Movements, Kira Andrade, told the Venezuelan News Agency that the “We are Venezuela” summit, which ends on Tuesday, is an opportunity to discuss and design an agenda of solidarity with the South American country and the Bolivarian Revolution.