Give U.S. and Cuba space to negotiate: OAS chief 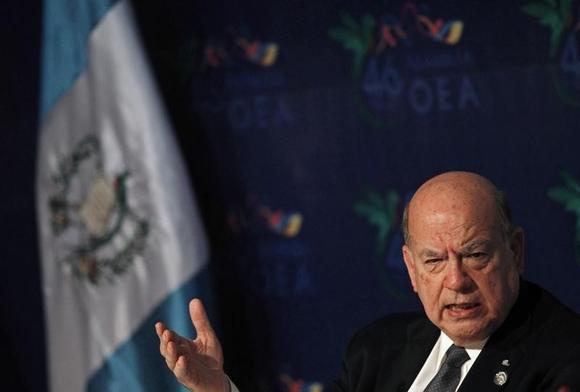 Jose Miguel Insulza, Secretary General of the Organization of American States, (OAS), speaks during a news conference a day ahead of the 46th Special Session of the OAS General Assembly in Guatemala City, September 18, 2014. Credit: Reuters/Jorge Dan Lopez

(Reuters) – Improving relations between the United States and Cuba will take time, and both sides should be given the space to negotiate without outside interference, the head of the Organization of American States, Jose Miguel Insulza, cautioned on Tuesday.

“It would be very unhelpful to try to artificially push for immediate results in every area,” Insulza told Reuters as U.S. and Cuban officials prepare for talks next week in Havana aimed at normalizing diplomatic ties after decades of hostility.

“I think we should let Cuba and the United States negotiate their matters and their problems and be as helpful as possible,” he said. “I don’t think you can make the clock run faster by pushing from the outside.”

The thawing of ties between Washington and Havana would ease years of tensions that have often played out at annual meetings of the 35-member OAS and allow for greater regional cooperation and trade, said Insulza.

Washington’s policy toward Cuba has increasingly polarized a region where many countries, including allies like Colombia and Mexico, believe the United States’ 50-year trade embargo has outlived its usefulness.

A meeting of the Americas in Panama in April will bring together all countries, including leaders from Cuba and the United States, for the first time ever.

“This opens the door for everyone,” said Insulza, a former Chilean foreign minister. “We can now deal with matters together. It releases a lot of tensions and pressures.”

He said he expected easing of U.S. travel, trade and financial restrictions against Cuba to be announced shortly.

“I expect this to move quickly on matters that were agreed on, but then the lifting of the embargo will have to wait, although I hope for not too long,” he added.

The OAS, with headquarters in Washington, suspended Cuba in 1962 for being Communist. While the OAS agreed in 2009 to lift the Cold War ruling, Cuba declined to rejoin the group.

Insulza said he hoped that as normalization talks progress Cuba will be willing to fully come into the OAS fold.

“I hope to have (that conversation with Cuba) very soon,” said Insulza. “We are open to a relationship with Cuba and to help it come back. The door is open.”

Insulza said the release of 53 political prisoners by Cuba under a deal with the United States showed that both sides are serious about normalizing ties.

“We should feel optimistic because the Cubans have already released some prisoners, but also realistic because probably not all of them will be out tomorrow,” he said. “We must also be practical. More negotiation may be necessary.”