Give the man a cigar! Vin Diesel and Michelle Rodriguez look pumped as Fast And Furious 8 becomes first US film to be shot in Cuba 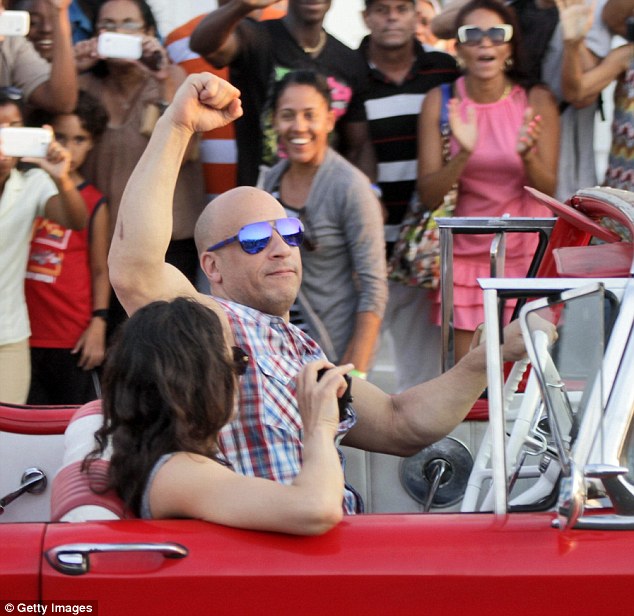 It is not every day one gets the chance to make history.

So no wonder Vin Diesel and Michelle Rodriguez looked so pumped as they shot scenes on Thursday as Fast And Furious 8 became the first US film to be shot in Cuba.

Excited crowds lined the streets in the communist backwater of Havana, with the thrilled actor punching the air as he sped past them while behind the wheel of what appeared to be a near mint condition 1957 Mercury Turnpike Cruiser.

Latina lovely Michelle also seemed thrilled to be there, and shielded her eyes from the sun with a pair of circular reflective sunglasses.

Vin’s character in the franchise Dominic Toretto is said to have Cuban heritage, which the thrilled star referenced in a video which he shared on Instagram to mark the moment.

The 48-year-old action star said: ‘Right now I’m with my director F. Gary Grey. We worked together maybe 17 years ago. And we’re at a place that nobody ever thought would be possible.

‘We are in Havana, Cuba. And you can see how beautiful it is, with all these beautiful people. They didn’t think it could be done. And we’re here, we’re doing it. And there is a lot of love here.

‘We’re just really proud to be here, man. This is paradise. We’re in Cuba, where the Torettos started. It’s Fast 8.

‘It’s Dom Toretto here, back in his home, home, homeland. And Gary is about to rip it.’

The move to film in Cuba comes just weeks after President Barack Obama became the first sitting US president to visit the island since 1928.

Obama and Cuban President Raul Castro agreed in December 2014 their countries should normalize relations, which had been frosty since 1961.

While the plot is yet to be revealed, series favourites Dwayne Johnson, Tyrese Gibson and Eva Mendes are all returning.

Even more excitingly, Big Trouble In Little China Town legend Kurt Russell has also been added to the cast.

Fast 8 will be the first film in the franchise, other than 2006 spin-off The Fast and the Furious: Tokyo Drift, not to star Paul Walker, who died in a fiery car crash in 2013 after a Porsche he was riding in slammed into a concrete lamppost at around 90 miles per hour.

It is not the only old franchise Vin is milking as he feathers his retirement fund however.

The film follows extreme sportsman Xander Cage, played by Vin, who returns from a near death experience to take on yet another tough mission.

The movie, which is scheduled for release in January 2017, will also star Australian actress Toni Collette and Samuel L. Jackson.