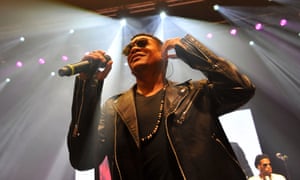 May 27 – By Gena-mour Barrett (The Guardian) “Bailando” is the word reverberating off the walls. Translated literally as “dancing”, it’s not only the name of Gente de Zona’s most popular song (and their opener for the show), it also perfectly encapsulates the night’s mood. Before the show has begun, the crowd is already buzzing, waving Cuban flags in the air, clapping their hands and moving their waists in time with the warm-up DJ.

If you’ve never heard of the Cuban duo Gente de Zona, they are by any definition a big deal: combining reggaeton with the traditional sounds of mambo and son cubano, the duo are hugely popular in Latin America, their tracks breaking a billion views on YouTube. Judging by their charming stage personas and infectious music, it’s not hard to understand why. At their backs, the soft lilt of the live guitar brilliantly complements the scraping sound of the merengue güiro, and the trumpeters and trombonists deliver a bold, metallic sound that penetrates each melody. During a particularly dynamic performance of Traidora, the guitar’s bass is turned up and the room feels more like a tiny Havana bar than a west London concert venue.