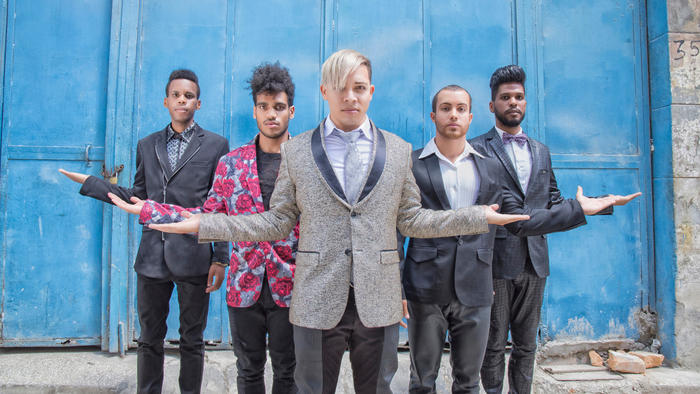 The Gay Men’s Chorus of Los Angeles and its Cuban counterpart, Mano a Mano in Havana, would like you to hear their song — 20 of them, presented in glittery, feathered costumes and all.

The two groups will give a joint concert, “Hear My Song (Oye Mi Canto),” on Saturday and Sunday at the Alex Theatre in Glendale. The concert, which includes classical Cuban music, modern American pop songs reinvented with a Latin twist and original compositions, is dedicated to the Orlando shooting victims. An as-yet undetermined portion of proceeds will go to a GoFundMe campaign organized by Equality California for families of victims of the Pulse nightclub shooting.

“We’re gonna cry through this entire concert,” GMCLA Executive Director Chris Verdugo said. “But we’ll raise our voices even louder now. We’ll be the voices of the 49 lives who have forever been silenced. We want to provide a space for people to mourn and grieve, but also to celebrate the beauty of these people’s lives.”

The 37-year-old GMCLA, more than 250 people strong, and the nascent, six-member Mano a Mano (Hand to Hand) might seem an unlikely partnership, but their missions are aligned: to promote LGBT rights and understanding. Their collaboration has been more than two years in the making. Cuban-born, Florida-based independent filmmaker Fermin Rojas co-founded Mano a Mano — Cuba’s only official gay men’s chorus, he says — in 2014 with his husband, Jay Kubesch. He approached Cuban American Verdugo about partnering for an L.A. show. That led to GMCLA members visiting Mano a Mano in Havana in February.

“I knew this alliance could break down barriers within the Cuban community,” Verdugo says, “and give people an opportunity to see how music really is universal.”

That Mano a Mano is a non-government-run, independently funded chorus is extremely rare in Cuba, Rojas says. The chorus performs free concerts at universities and music festivals in Cuba. It doesn’t yet have a building of its own and instead rehearses out of the Instituto Superior de Arte. The Cuban government has been accepting of Mano a Mano, Rojas says, inviting the chorus to perform at the last two annual galas for Cenesex, a government organization advocating for LGBT and women’s rights in Cuba.

“Cuba, with all its political shortcomings and lack of civil liberties, it leads the Caribbean in LGBT rights,” Rojas says. “You experience homophobia, it’s a macho culture. But you don’t experience it in the same threatening and lethal way you might in Jamaica.”

Still, Rojas felt a gay men’s chorus in Cuba would have an important place in creating opportunities for awareness.

“There might be that one child in a remote province of Cuba that has no reference for what a gay person is or how to be one,” he says. “And it may provide heterosexual audiences the opportunity to have a positive encounter with gay people in a very different atmosphere that they wouldn’t otherwise have.”

This weekend’s concert, which kicks off Mano a Mano’s first U.S. tour, hitting six cities this summer, will include song and dance with a Latin flair. Think Gloria Estefan remixes and a salsa version of Culture Club’s “Karma Chameleon.” There’s also an original commission, for which composer Michael Shaieb set music to a work by gay poet Richard Blanco, who is Cuban American.

“There’s original costuming. The guys have been taking Latin dance classes for months,” Verdugo says. “Part of our mission is to celebrate people, help them be their true authentic selves, so we wanted as authentic a concert as possible.”

Adds Rojas: “If you want to experience what a carnival in Cuba might be like, stick around for the finale.”