Paris, May 14.- “The Cuban Five: Obama and election of injustice” is the title of a documentary about the case of the five Cubans held prisoners in the United States, screened at the headquarters of the France-Cuba organization. 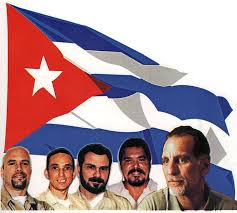 Produced by that solidarity association and directed by journalist and writer Hernando Calvo Ospina, this 12-minute video features valuable testimonies of figures involved in the struggle for their release.

“The objective is to raise French public awareness about the injustice committed with those men and at the same time, we are going to translate it into English language because we believe the battle for the Cuban Five is in the United States,” the documentary’s director told Prensa Latina.

Gerardo Hernandez, Ramon Labañino, Antonio Guerrero, Fernando Gonzalez and Rene Gonzalez were detained in 1998 and submitted to a biased trial in Miami.

Rene and Fernando already returned to their homeland, after completing their prison sentences, but the three others are still in U.S. jails.

During a visit to Havana, the documentary’s director could talk with Rene and Fernando, as well as with Adriana Perez and Elizabeth Palmeiro, spouses of Gerardo Hernandez and Ramon Labañino, respectively.

Members of the Cuban diplomatic staff accredited here, intellectuals, and members of solidarity groups attended the premiere of the documentary.(Prensa Latina)