Posted on January 7, 2018 by Anthony Brenner 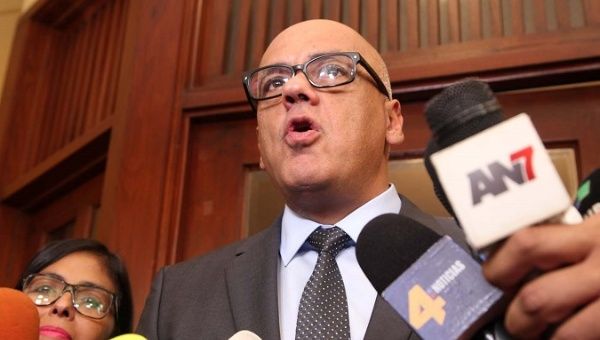 More than 3,000 negative news stories were not only damaging to the nation, but to its people as well, Communication Minister Jorge Rodriguez said. | Photo: Reuters

Venezuela’s minister of communication and information denounced “psychological hoaxes” circulated by international media which portray the country as a warring nation.

Following up on President Nicolas Maduro’s request to halt the spread of such misinformation, Rodriguez held a press conference to denounce the “psychological hoaxes” which portray the country as a warring nation.

In his speech, the communications minister rejected the “onslaught” of criticism targeting Venezuela over the past year, saying that the more than 3,000 negative stories were not only damaging to the nation but to its people as well.

Rodriguez also raised a new strategy to combat US economic sanctions, saying the president’s plan to incorporate cryptocurrency will reduce Venezuela’s dependency on the US dollar.

“It will mean the definitive death of that foulness called ‘Today’s Dollar’ because a reference price will be established next to the new Dicom that will be announced on Monday, so that people can exchange crypto actives or currencies in a way that moves away from today’s dollar,” Rodríguez said.

Strict currency controls have forced people onto the black market, on which one US dollar can buy 137,000 bolivars. The official exchange rate, meanwhile, is 10 bolivars per US dollar.

President Maduro announced Friday that the value of each Petro would be the equivalent of a barrel of oil: around US$59.

The president hopes Petros will allow Venezuela to “advance in issues of monetary sovereignty, to make financial transactions and overcome the financial blockade” implemented by the United States and its junior partners.

Rodriguez also condemned the most recent round of sanctions against four Venezuelan officials imposed by the US Treasury Department on Friday.

“We could see the demonstrations of the US State Department, where it points out an infamous, crude and coarse blackmail against the National Armed Forces, which is why we reject them because they are ridiculous and stupid and express a deep ignorance of the reality of Venezuela and our FAN.”