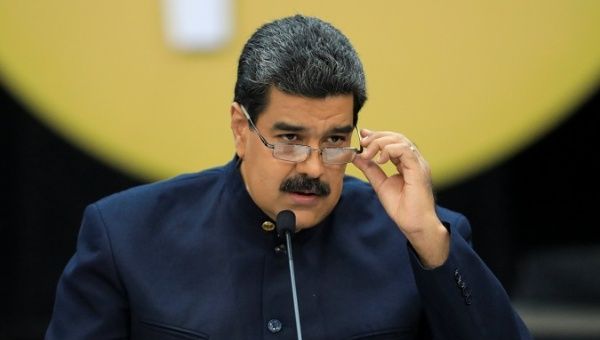 Venezuela’s President Maduro speaks during a meeting with ministers responsible for economic sector at Miraflores Palace in Caracas. | Photo: Reuters

With its latest move, the European nation joins the U.S.-led economic war against the Venezuelan socialist government.

March 28 (teleSUR) Following the lead of the United States and the European Union in their economic attack on Venezuela, Switzerland announced Wednesday a series of sanctions against Venezuelan institutions and senior officials.

As with European Union sanctions imposed in January, those on the sanctions list include former National Assembly President Diosdado Cabello, Interior Minister Nestor Reverol and Chief Justice Maikel Moreno. The Swiss sanctions include banning the sale or export to Venezuela of arms and goods.

The Venezuelan government has repeatedly labeled such sanctions by the U.S. and its western allies as intervention and interference in the internal affairs of the country.

Neutral Switzerland argued that sanctions were imposed because it was “seriously concerned by the repeated violations of individual freedoms in Venezuela, where the principle of separation of powers is severely undermined and the process in view of the forthcoming elections suffers from a serious lack of legitimacy”.

The Venezuelan government flatly denies such allegations and stresses that such claims are part of an internationally coordinated right-wing campaign by the U.S. and its allies in Latin America to discredit the government in Caracas and oust democratically-elected President Nicolas Maduro.

Also Maduro and his government have repeatedly stated that economic sanctions against his country, which have been lobbied for by the right-wing Venezuelan opposition, as well as the hoarding of goods by local corporations have been the main drivers behind the recent shortages in the country.