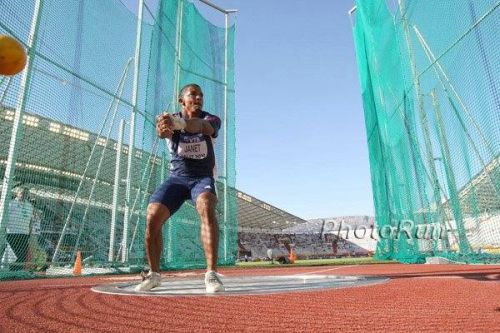 A harvest of four titles in athletics and a gold medal in Greco Roman wrestling stood out in the performance of Cubans November 25th in the 22nd Central American and Caribbean Games Veracruz 2014.

Cuban wrestler Mijaín Lopez, double Olympic champion and five-time world champion, was one of those who climbed to the top of the podium, with his win in the 130 kg division. Lopez won the crown by forfeit because his final opponent, the Dominican Ramon Garcia, did not show up because of an injury.

The women of freestyle wrestling were included among the finalists, but Yusneylys Guzman (48) and Yakelin Stornell (58) had to settle for silver medals.

In athletics, Cuba won gold and silver medals in men’s hammer throw Roberto Janet and Reinier Mejias, in that order.  Janet secured the first place with 74.11 meters , relegating thus his compatriot Mejias (71.81), while the bronze medal went to the Costa Rican Roberto Sawyers (70.66).

Denia Caballero gave Cuba another title in the athletics by winning the women’s discus final.

Caballero won the golden medal on her third attempt, where she reached 64.47 meters, new record that exceeded the longstanding mark of 63.76 imposed by the also Cuban María Cristina Betancourt, in the edition of Havana 1982. In addition, Yaime Pérez (62.42) and Colombian Johana Marcela Martinez (56.27) finished second and third respectively.

Cuban delegation also made the one-two in the 400 meters, in both sexes, through Lisneidys Inés Veitía and Raidel Acea.  Veitía achieved her season best, 51.72 seconds, and was followed by her team-mate Daisiuramis Bonne (52.49) and Colombian Yenifer Padilla (52.95),respectively.

In the case of Acea, he climbed to the top of the podium with a time of 45.36 seconds to beat his compatriot Yoandys Alberto Lescay (45.56) and Venezuelan Alberth Bravo (45.82).

The four Cubans who competed in badminton singles won theirmatches, including Osleni Guerrero, with serious pretensions to take the gold medal in men´s event.

In addition, Yansy Duquesne finished second in the hoop event of artistic gymnastics with a score of 13,717 units. Duquesne was only surpassed on the podium by the hostess Ruth Castillo (15,633); while the bronze medal went to Colombian Lina Marcela Dussán (12,833).

In the boxing semifinals, the five contestants from Cuba earned their ticket to the finals; these are the cases of Yosbany Veitía (52 kilograms), Lazaro Alvarez (60), Roniel Iglesias (69), Julio Cesar La Cruz (81) and Yohandi Toirac (+91).

In relation with team sports , the Cuban women softball players reached their second win in the tournament after defeating 2-0 the Dominican Republic; and in men´s water polo the Caribbean squad beat 16-4 Trinidad and Tobago , although the women of that same sport lost 7-14 to Venezuela.

On beach volleyball, the two Cuban couples debuted with easy victories; the women defeated 2-0 US Virgin Island; while the men beat Aruba by the same score.