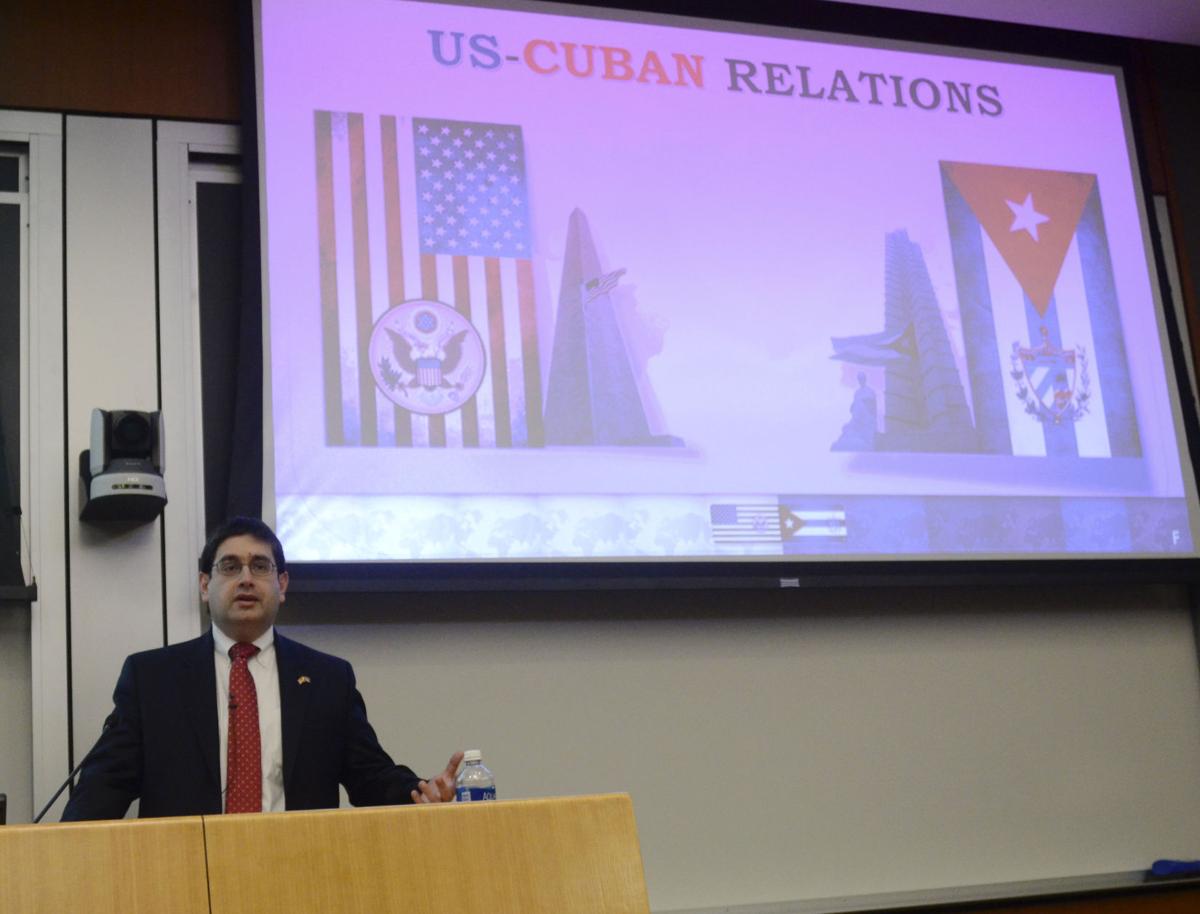 Fraga is the First Secretary for the Embassy of the Republic of Cuba.

He began his presentation with an opening question “What do you know about Cuba?” Very few people raised their hands with every question presented on the screen.

Fraga said the United States and Cuba can work together to improve relations between both countries and lift the embargo.

“Cuba is not perfect,” Fraga said. “We recognize we have to change many things.”

However, Fraga said, Cuba is the first country in the world to receive WHO validation for eliminating mother to child transmission of HIV and syphilis.

Other numerous Cuban innovations such as diabetes and ulcer medication are helping patients worldwide but not in the U.S. due to their unwillingness to let Cuban innovation be adopted in the country, Fraga said.

“The U.S. citizen can’t travel to Cuba for medical treatment,” Fraga said. “It’s not possible to provide them with services and treatments recognized worldwide.”

Fraga said doctors from the island were sent to various countries to help treat diseases such as Ebola however, the U.S. government rejected their help during hurricane Katrina.

“We offered a thousand doctors to come to the United States after Hurricane Katrina and U.S. officials turned us down,” Fraga said.

Through a series of PowerPoint slides and polls conducted in the U.S. Fraga was able to make his point clear. The U.S. was in no rush to lift the embargo, for now. Even though his slides and polls proved that U.S. citizens thought the country would benefit from lifting the embargo.

“56 percent of Americans and more than 60 percent of Floridians and Latinos are in favor of changing U.S. policy towards Cuba,” Fraga said.

However, the U.S. and Israel abstained from voting on the lift of the embargo when the United Nations asked countries to vote, Fraga said.

In his next slide Fraga explained how the embargo might be hurting the U.S. and its citizens instead of helping it.

“The application of the embargo has caused damages of over 125.9 billion dollars 4.6 billion in the last year,” Fraga said.

Fraga said the U.S. can also ultimately benefit from lifting the embargo because the U.S. is currently losing the opportunity of gaining money from Cuba in food imports. He said, Cuba imports about 80 percent of their food.

Toward the end of the presentation, Fraga showed a picture of former President Obama and Cuban dictator Raul Castro.

Fraga said, on December 17 everything changed, with both presidents announcing the relationship between both countries.

“Since the reestablishment of relations, Cuba and US have signed 22 bilateral agreements,” Fraga said.

Fraga said Americans are now going to Cuba to do business.

Attendee Frank Guzman said he found it interesting when Fraga referenced multilateral consensus except on the part of the U.S. and Israel on the issue of lifting the embargo.

Guzman said, the lift of the embargo would potentially have an immediate effect on family reunification which would be more qualitative than quantitative.

“I was unaware of that the U.S. rejected Cuba’s offer of doctors being sent after hurricane Katrina,” Guzman said. “Seeing as though Cuba is big on training doctors and people in the medical field.”

Lauren Horner, another attendee, said she learned that the embargo is a long-lasting issue that is still relevant today.

“We shouldn’t give up hope on renewed relations,” Horner (graduate-international affairs) said. “The lift of the embargo will pave way to cultural cohesion and economic opportunities for the people of Cuba.

Horner said, with more travel and exposure to people will eventually see the reality of Cuba instead of assuming from the outside.

Miguel Fraga concluded his presentation with several quotes from Fidel and Raul Castro as well as Barack Obama on why lifting the Cuban embargo can ultimately benefit both countries.