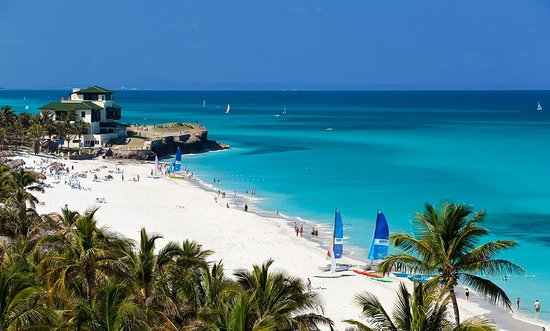 Located 140 kilometers east of the capital Havana, the beach resort drew half a million visitors over the past tourism high season, which runs from November to May, a four-percent increase over the same period the year before.

Most of those travelers came from Canada, followed by Germany, Russia, Italy and France.

“This is a beautiful beach,” young Belgian visitor Joachim Hefenberg said of the long expanse of white sand lapped by turquoise water.

It’s his first trip to Cuba, Hefenberg, who will be returning to Belgium shortly, told Xinhua, and he’s already planning to come back.

Apolonio da Costa, a Brazilian traveling with his wife Carla Mello, likes to do his aerobic exercises on the beach, which he considers to be the loveliest he has ever seen.

His wife agreed, saying Varadero is “a paradise for tourists, who will find tranquility and security.”

Argentinean mother Ines Abradelo, who was sitting under a beach umbrella, next to her two-year-old son, said the beauty of the place was complemented by the warm welcome she has received from locals.

“The people are the best thing, they are very hospitable,” said Abradelo.

Cuban authorities expect to see some 1.5 million visitors in Varadero alone this year, and plans are underway to accommodate their growing numbers.

“Tourism development is an engine that drives the country’s economy,” Tourism Minister Manuel Marrero said earlier this week, as he inaugurated the 9th Varadero Gourmet Festival, an event that attracted representatives from 16 countries.

At least four of those new hotel developments are underway in Varadero, adding nearly 2,000 more rooms to the existing 21,500 rooms distributed at 57 hotels.

Las Nubes, a 24-story hotel offering 564 rooms, is slated to become the tallest building in Varadero, which is additionally getting a new 18-hole golf course and beer brewery.

Renovation work is also being done on the resort’s historic Mansion Xanadu, an exclusive estate built in the 1920s by the heir to the Dupont chemical fortune. Today, the mansion, overlooking the beach and a nine-hole golf course, serves as the club house of the Varadero Golf Club.

Some 7,000 hotel rooms are also being refurbished.

Visitors to Varadero today have a bigger range of activities to choose, from scuba diving to fishing or bird watching in nearby Cienaga de Zapata, a pristine wetland ideal for nature tours.

In 2016, just over 4 million foreign travelers visited Cuba, 14.5 percent more than in 2015, according to the Tourism Ministry.

With tourism on the rise, the challenge for tourism officials will be to develop the industry in a sustainable way, to preserve the natural attractions that each year draw hundreds of thousands to this Caribbean hotspot.