Posted on January 3, 2018 by Anthony Brenner Known as the “Cradle of the Cuban Revolution,” the city of nearly half a million people witnessed the hapless but decisive offensive that signalled the beginning of the end for the U.S.-backed dictatorship of Fulgencio Batista.

On July 26, 1953, legendary revolutionary leader Fidel Castro and his rebel army launched an attack on the town’s Moncada Barracks, then the country’s second most important military stronghold. They were repelled by the army, but the revolutionary uprising that would unseat Batista on Jan. 1, 1959 was officially begun.

To launch a surprise offensive, Castro had about 100 rebels, mostly from Havana, transported in small groups to a farm just outside Santiago that he rented under the guise of raising foul.

The rebels gradually concentrated at the Siboney Farm, gathering arms and munitions until it was time to move on the barracks.

Declared a National Monument, today the farm houses a museum to this chapter of the revolution, displaying photographs, documents and even one of the 16 vehicles the rebels used to arrive at the barracks.

“Here you can observe all of the preparations of the attack and how the farm was transformed into a makeshift and undercover military camp,” the museum’s Aleidy Oliva told Xinhua.

After the revolution, the Moncada barracks were turned into a school, though today it also houses a museum. 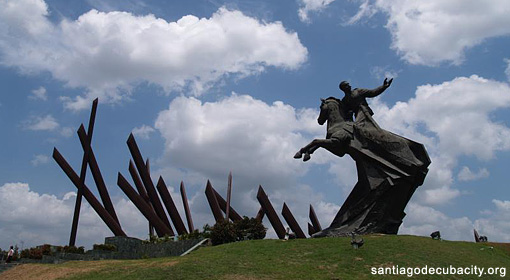 “The museum’s seven rooms present all of the actions taken by the revolutionaries led by Fidel and the situation that led to the attack,” the museum’s Ana Santacruz said.

More than three million people, both Cubans and foreigners, have visited the site.

Following the failed assault, the rebels were put on trial. Castro eloquently spoke in his own defense and gained prominence for the revolutionary ideals he espoused.

Castro was sentenced to 15 years in prison but public pressure led to his pardon some 20 months later. He and his fellow revolutionaries went to Mexico, where they continued their struggle to overthrow Batista, returning in December 1956 to launch a second offensive.

Santiago de Cuba again served as their base. Years later, on Jan. 1, 1984, then president Castro paid tribute to the city and its residents’ support for the rebel movement, bestowing on it the title “Heroic City of the Republic of Cuba.”

After his death on Nov. 25, 2016, the life-long revolutionary returned to Santiago, where he is buried at the local Santa Ifigenia Cemetery.