Exclusive: Maradona Calls for Defense of Venezuela, Denounces US Sanctions 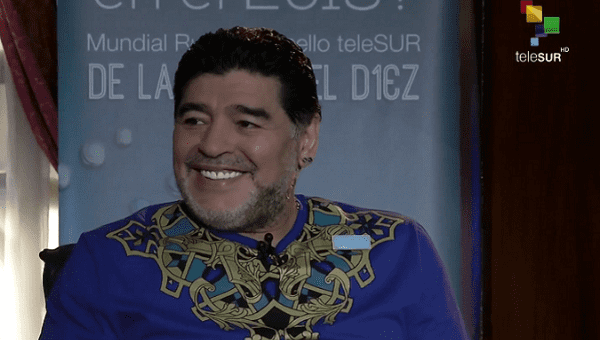 Maradona will host the program “De la Mano del Diez,” which will be broadcast on teleSUR during the 2018 World Cup Russia. | Photo: teleSUR

During an exclusive interview with teleSUR, the soccer legend thanked his fans and supporters who made it possible to “give Nicolas (Maduro) a hug.”

Nov 9 (Telesur) – Former soccer star Diego Maradona said he will support Venezuelan President Nicolas Maduro until the day he dies, in an exclusive interview with teleSUR.

The Argentine thanked his fans and supporters who made it possible to “give Nicolas a hug in such a difficult moment” for the country.

“I’m with Maduro, I’m still with him and I’m going to die with him,” Maradona said.

He described the strength and resolve the president has maintained amid the onslaught of criticism and perpetual attacks targeting Venezuela from around the world, particularly the United States.

Maradona called the U.S. behavior “vile” adding that it was determined to end the Bolivarian Revolution any way possible.

“They are committing murder,” he said, referring to the U.S.-imposed economic sanctions, which he said have only served to hurt the Venezuelan people.

This year, the Trump administration has imposed a series of financial sanctions against Venezuelan officials, including Maduro and Vice President Tareck El Aissami, and the state-run oil company PDVSA. A round of new sanctions was imposed on Venezuela in September including a travel ban.

The soccer legend compared the U.S.-Venezuela relationship with the Palestine-Israel conflict.

“The Palestinians throw stones at Israel, while it attacks them with missiles and continues to take land, while nobody does anything,” he said.

“No one manipulates better than the Yankee and they do not talk about the real things that happen in the world, like what the U.S. stole from Iraq, the amount of money that country had, the gold, the paintings, everything. The Americans stole,” Maradona said.

Maradona encouraged the nation to support its president, saying if Venezuelans won’t defend Maduro, no one will. He stated Venezuela should follow Fidel Castro’s advice, and embark on a “war of ideas” and feed the intellect of the people.During his interview with teleSUR, the activist also spoke on the state of other Latin American countries that are under attack by the United States.

He condemned the economic, commercial and financial blockade against Cuba.

In regards to his home nation and its neighbor Brazil, he denounced the neglect shown by state administrations towards the people’s needs, adding that he couldn’t understand why anyone would still support Argentine President Mauricio Macri.

“The U.S. President Donald Trump and the de facto president of Brazil Michel Temer could do a lot for the people, but they are more interested in going on television, and that is not their job,” he said.