Evo To Rubio: US is The Real Global Threat, Not Venezuela

Posted on September 2, 2018 by Anthony Brenner 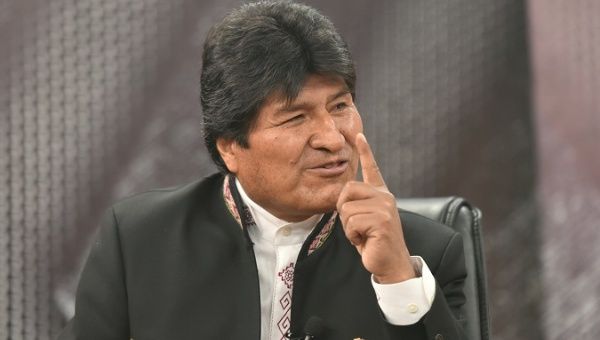 President Evo Morales denounces Senator Marco Rubio’s threat of using the ‘Empire’s army against the people of Venezuela because he assumes a threat against the security of the US.’

Sept 1 (teleSUR) Bolivian President Evo Morales said Friday, on Twitter, that “the U.S. is the real threat to humankind,” responding to Senator Marco Rubio’s talk of using the U.S. Armed Forces against the Venezuelan Government as it “has become a threat for the region and even for the United States.”

Morales said “Senator Marco Rubio, warns of using the Empire’s army against the people of Venezuela because he assumes a “threat” against the security of the U.S.” The Bolivian president remarked that is the U.S. is the real threat to the world’s people, citing “its history of interventionism and military coups d’état in the world.”

The Florida Republican senator made the comments after meeting with national security advisor for the Donald Trump Administration, John Bolton, at the White House Wednesday.

Earlier this year, in February, Rubio made a similar statement, encouraging the Venezuelan Army to overthrow the Nicolas Maduro-led Bolivarian government.

“The world would support the Armed Forces in #Venezuela if they decide to protect the people & restore democracy by removing a dictator,” Rubio said, in a tweet, on Feb. 9.

On Saturday, Jun. 16, Bolivian President Evo Morales forcefully stated that Latin America “is no longer the United States’ backyard,” while denouncing the United States’ attempt to convince its South American allies to help orchestrate a military intervention or coup in Venezuela.