Posted on December 2, 2017 by Anthony Brenner 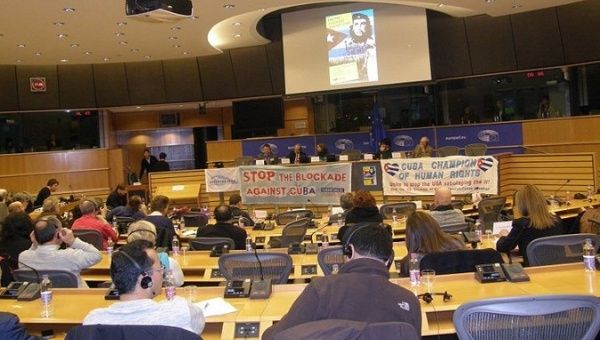 The European Parliament described the Cuban blockade as “the greatest violation of the human rights of an entire people.” | Photo: Twitter / caribbeannewsuk

At a meeting entitled “End the Blockade Against Cuba,” which was hosted by the parliament’s legislative body, participants debated the impact of the ongoing “seige.”

Dec 1 (Telesur) Members of the European Parliament and social movements from across the continent have untied to condemn the recently bolstered U.S. blockade against Cuba.

At a meeting entitled “End the Blockade Against Cuba,” which took place on November 29 and 30 and was hosted by the parliament’s legislative body, participants debated the impact of the ongoing “seige.”

MEPs and representatives of social movements from Portugal, Spain, Italy and Belgium unilaterally rejected the “economic, commercial and financial siege that constitutes the biggest obstacle for the economic development of the Caribbean nation,” they said in a statement. The signatories described the blockade as “the greatest violation of the human rights of an entire people.”

The blockade also affects European citizens, said Vania Ramirez, spokesman for the Swedish chapter of the International Committee for Peace, Justice and Dignity to the Peoples, citing the example of encountering obstacles when attempting to purchase Cuban products.

The participants also discussed the fines imposed on European banks for carrying out operations related to Cuba.

Among those in attendance was Camilo Guevara, director of the Che Guevara Study Center and son of late revolutionary fighter Che Guevara. At the session, Guevara screened unpublished documentary “Hoy Liberé a una Mariposa” (Today I Freed a Butterfly). The film has been dedicated to Che and his guerrilla comrades in Bolivia, and is being billed as a tribute to their families.

In July of this year, the European Parliament approved the first-ever cooperation deal between the EU and Cuba. It seeks to promote bilateral trade, dialogue and provide for joint action on the world scene.

However, the EU added a non-legislative resolution clause warning that the deal would be suspended if Cuba violates its human rights provisions, which Cuba in turn condemned as “colonialist.”

The Cuban government argued that the move stands in contrast to positive developments being made between the Caribbean island and the European Commission.

In September, U.S. President Donald Trump announced an extension to his country’s economic blockade against Cuba for a year.

In June, the White House moved to reverse the gains made by former President Barack Obama to normalize ties with Cuba, including the reopening of the Cuban embassy in Washington for the first time in 50 years, as well as the formation of 26 agreements between U.S. businesses and the Cuban government.