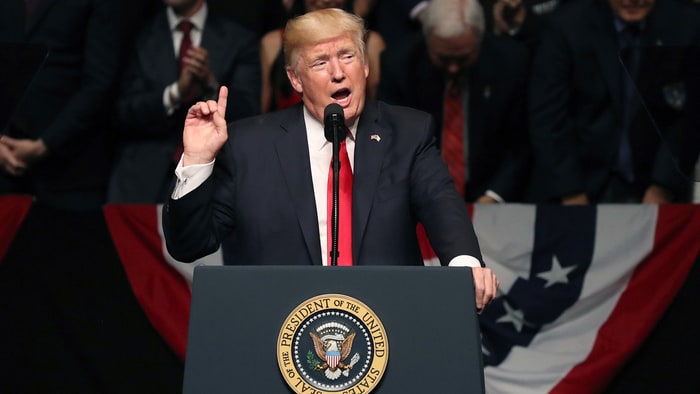 When members of the dwindling cadre of Cuban-American hardliners crammed into a theater in Miami’s Little Havana neighborhood last week for the unveiling of the Trump administration’s rollback of select Obama-era Cuba policies, President Trump struck a familiar, self-congratulatory note. Standing alongside Sen. Marco Rubio, Rep. Lincoln Diaz-Balart and other Cuban-American elected officials, and speaking in a city-owned space named after a leader of the CIA-backed Bay of Pigs invasion who once fundraised for the Watergate burglars, Trump lambasted his predecessor’s Cuba policies as a “completely one-side deal,” pontificating that “travel and trade does not help the Cuban people, they only enrich the Cuban regime.”

Trump climbed into a rhetorical time machine, referencing the United States’ Cuban exilic-era mantra that the blockade’s restrictions would dismantle Cuba’s socialist experiment. Perhaps unsurprisingly, Trump had as early as the late Nineties supported economic relations with Cuba, and was reportedly found to violate the embargo’s legal parameters in 1998 to line his own pockets. But with pressure from the hardliners and officials, that mantra prevailed as a politically convenient trope during Trump’s campaign – despite his company, once again, reportedly eyeing golf course ventures in Cuba. Just a year and a half ago, Trump called his predecessor’s moves regarding Cuba “fine,” acknowledging that “50 years is enough.” After the Obama administration began its historic move in 2014 to “normalize” relations with Cuba through diplomacy, repurposing travel and liberalizing some financial transactions, the American public agreed, showing overwhelming support for the new accords; a majority of Cuban-Americans, even in Florida, came around. In 2014 alone, over 600,000 U.S. travelers visited the island nation, the majority Cuban-Americans.

The Trump administration’s new measures, rooted in 2015 bills initiated by Rubio and members of the House, is rationalized by the argument that freer flows of money spent by U.S. visitors “trickle up” toward a repressive Cuban government, given the Cuban military’s vast ownership (estimated near 60 percent) of island enterprises in myriad sectors of the nation’s economy. Accompanying this narrative is the persistent rationale that Cuba must change its human rights record before the embargo and travel restrictions are lifted – an argument that ignores the empirical data that through its isolationist, and hence impoverishing, contours, the more potent human rights violator is that of the longtime embargo itself. The reality is that Cuba in no way compares to repressive governments in countries the U.S. has “normalized” relationships with, a position equally hard to swallow given the Trump administration’s exacerbation of abusive domestic policy positions on immigration, civil rights and criminal justice historically to presently documented by human rights groups. This is also coming from the same country that early in the 20th century aided repressive Cuban regimes in their aim to eradicate Afro-Cuban communities as they engaged in political and economic self-assertion, while backing subsequent dictators whose repression set the stage for the Cuban Revolution.

This is not to obfuscate that Obama-era Cuba policies, now recalibrated under Trump, operate from the traditionally bipartisan space of overlooking the self-determination of the Cuban people – those critical or loyal to its government, or somewhere in between. Among the latter, this can include Cubans who have formed post-Special Period-allowed smaller enterprises and who, in democratic-socialist form, defend the Cuban government’s provision of universal health care, housing and education. Trump’s new proposal oddly ignores that Cuban small-business owners (cuentapropistas), individual to cooperative alike, rely on now-penalized individual U.S. travelers as their primary customers. An unintended consequence is that this could also increase their reliance on remittances, placing burdens on their Diasporic families – while penalizing those who work in Cuba’s public sector, further disaffecting their standard of living. Paradoxically, conservatives incessantly argue that businesses need stable political “environments,” but the directives supposedly designed to destabilize the Cuban government will actually hurt the growth of private business in Cuba.

We should also recognize resident Cuban groups and movements directly confronting expanding capitalism and its effects on Cuba’s environment and economy, with disproportionate impact on its aging population, women and citizens of color. With vast racial disparities long evident in Cuba’s expanding tourism industry and other sectors of the economy, once suppressed anti-racism organizations have sprouted throughout the island, seeking political voice amid the newer economic currents. Some intersect with neighborhood groups and efforts inspired by global movements, from Argentina’s horizontalidad to Occupy in the U.S. and beyond, with Cubans imploring direct democratic, cooperative, “self-managed” approaches to production and local problem-solving, independent from the nation’s traditional top-down, totalitarian model. Cubans often wait excessively for the government to approve local infrastructural improvements, but local groups are organizing to carry them out themselves; an ongoing embargo limits their capacity to do so.

If anything, Trump’s new restrictions merely serve as lip service to the views and disproportionate influence of aging white, wealthy exilic Cubans. The continued assumption is that the Florida Cuban-American vote operates as a reactionary monolith – it doesn’t, and never has – and that the notorious voting bloc made Trump’s ascension into power possible, therefore fueling his campaign promise. These myths, aptly dispelled by scholars, are also situated in a still-lingering Miami-based public policy that favors the concerns of a few powerful Cuban exiles at the expense of local blacks, Latinxs and Afro-Latinxs. This also disaffects other Cubans, subsequent generations and more recent immigrants, many of whom are of color and working class, who hold moderate to progressive positions toward U.S.-Cuba policy, or view a racially hostile GOP (and disconnected Democrats) as threats to their economic survival.

Lifting the many layers of the Cuba embargo shouldn’t be argued on the grounds of outdated Cold War-era notions – such thinking assumes that imposing the embargo in the Sixties and strengthening it in subsequent years (the 1992 Torricelli bill, the 1996 Helms-Burton Act and now Trump’s blowhard move) are morally justifiable acts. Instead, ending el bloqueo and its attending policies is an ethical and moral imperative, given not just the universal human right to migrate, travel to assist ailing loved ones, send remittances or food and medicine, or exchange on scholarly or cultural bases, but moreover the well-documented economically deleterious and politically repressive effects on the Cuban people.

Trump’s new Cuba policy directives may not be, in the political aggregate, as draconian as he boasted, but they remain irresponsible, immoral measures, with disproportionate effect on our island relatives and working-class Cuban-Americans alike. Elected Cuban-American officials, Republican or Democrat, who support this move should pay in the election booth, while Cubans, resident and U.S.-side, marginalized to privileged, should continue organizing across race, gender and class lines to end el bloqueo’s repressive contours once and for all.