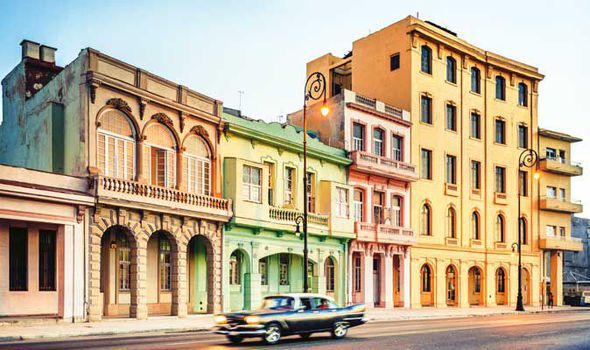 Cuba is hot right now, and not just in the humid way that makes my hair frizz as I step off the plane at José Martí International Airport. The island is seeing an unprecedented surge in numbers of tourists intrigued to experience Castro’s time capsule while it lasts.

Tour operators are reporting an 80 per cent spike in enquiries about one of the last countries in the world that is entirely free of Frappuccinos, Big Macs and iPhones.

Cuba has been cut off from much of the western world since its communist revolution in 1959. But now that US President Obama is trying to repair relations, it’s only a matter of time before modern life descends on this isolated island.

As I sit curled up in a wooden rocking chair on the porch of my yellow-painted casa with a mojito and a book, it is not hard to see the appeal of Cuba’s simpler life. My phone hasn’t had a signal for days and with barely any Wi-Fi there is no opportunity to feed the social media habit.

You are more likely to see people smoking or playing the maracas in Cuban restaurants than glued to screens.

It is the place to stay for access to the UNESCO World Heritage Site of the Jurassic Park-like Viñales Valley, dotted with dome-shaped limestone outcrops called mogotes that rise as high as 300 metres.

Here you can hike, bike or, as I did, ride a horse through the red, muddy tobacco fields, stopping off to watch how leaves are dried and then rolled into fat cigars by farmers wearing khaki shirts and cowboy hats.

Many of the local homes in Viñales have been opened up as B&Bs, known in Cuba as casas particulares, which is Spanish for private houses. In the late 1990s the government allowed people to rent rooms to tourists, and these home stays have proliferated.

They are an inviting alternative to the state-run hotels and offer an insight into Cuban family life, including delicious home-cooked meals.

Viñales is about two hours from Havana, where I start my 10-day trip booked for me by the travel company Rickshaw, which plans organised but authentic trips for independent-minded travellers.

It began well, with my first taxi from the airport an original 1950s chrome-clad Buick that makes me feel like I ought to be off to a drive-through movie. After taking in the spectacular collection of architecture in Cuba’s capital, I head into the countryside.

First stop is Las Terrazas, an eco-reserve in the Sierra del Rosario mountains, designated a Biosphere Reserve by UNESCO in 1984, and the site of Cuba’s earliest coffee plantation.

The guide shows us how slaves used to pick, dry and separate beans in the stifling midday sun until slavery was abolished in 1866. Las Terrazas is also a popular destination for birdwatchers, and I spot the melodic tocororo, Cuba’s national bird, while turkey vultures circle overhead.

Then there are the natural pools and waterfalls, perfect for a cool down before lunch in a paladar. The paladars are often family-run businesses that offer much tastier food than the government-run restaurants.

As we sample roast pork, a live salsa band starts up and, between courses, I’m invited to dance around the restaurant by a 76-year-old local woman whose hips move faster than Beyoncé’s. Needless to say, I can’t keep up.

You cannot visit Cuba without a trip to one of its perfect beaches. Cayo Jutias is well worth the hour’s drive from Viñales to top up your tan. Varadero, a resort a couple of hours from Havana, has a 20km white beach which is often referred to as one of the best in the Caribbean. At Casa Papo’s House, where I have an air-conditioned apartment, I am a three-minute walk from a postcard-perfect stretch of empty turquoise ocean.

There is a reason why Cuba has suddenly shot to the top of everyone’s travel bucket list. Now’s the time to book a trip before it loses its authentic charm.

Rickshaw Travel (rickshawtravel.co.uk, 01273 322399) offers a ready-made Cuba two-week itinerary, Mi Casa, Tu Casa, staying in local homes, including a transfer by classic American car to a hotel in Havana, from where travellers visit Viñales, Las Terrazas, Trinidad and Varadero. From £1,075 per person, it includes transfers, accommodation with breakfast and all tours.

Ten things you must do in Cuba

2. Practise your Spanglish with a Cuban family in a casa particular, or Cuban private home stay.

3. Spot Cuba’s national bird, the tocororo (left), in the eco-resort of Las Terrazas.

5. Salsa, mambo and cha-cha to a live band in one of Cuba’s many cobbled squares.

6. Top up your tan on the Caribbean’s best beach, the 20km-long stretch in Varadero.

8. Sip an ice cold daiquiri or mojito in El Floridita, the most famous cocktail bar in Cuba.

9. Watch tobacco leaves being dried and then rolled into cigars in Viñales Valley.

10. Feast on lobster or roast pork in a paladar, or privately run restaurant.