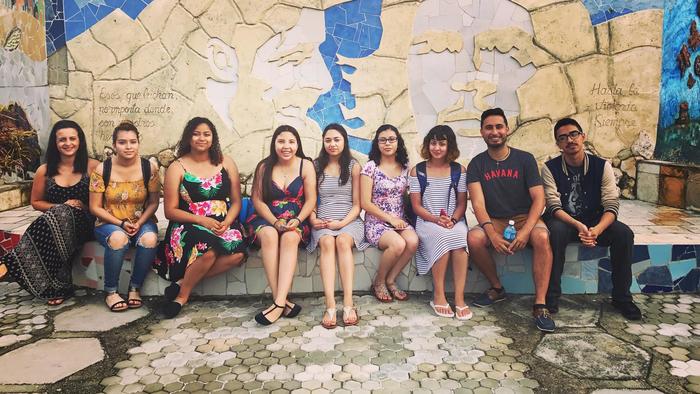 A trip to Cuba was enough to convince some East Aurora High School students the country wasn’t anything like what they had heard about it.

The food was better than American food and the cars older than American cars, some students said. The technology wasn’t as advanced. The people they encountered on the trip were nice, they said.

“They’re just like us, I guess,” said Gabriela Ramirez, who will be a senior in the fall. “They continue to live on happy, even though they might not have that much money.”

The trip was meant to be focused on people, trip organizer and teacher Simon Rodriguez said. During seven days in the country, students visited historical sites, such as museums and the Bay of Pigs and swam in a river and in the Caribbean Sea. They interacted with students at schools focused on art or theater, toured a farm and a conservation project and saw privately run businesses such as restaurants or workshops, he said.

Rodriguez brought the trip idea to the East Aurora School District 131 board for approval months after the U.S. and Cuba officially restored diplomatic relations in 2015.

In mid-June, days after the East Aurora students left for Cuba, President Donald Trump announced a policy tightening commerce restrictions and some regulations on travel, though it left in place many changes put in place by former president Barack Obama.

Rodriguez said the trip was designed to give students a chance to experience cultures they normally wouldn’t encounter and to get outside their neighborhood and see the world. He hoped students came back with a desire to learn about other cultures and histories and a greater understanding of the significance of the history between Cuba and America, he said.

“I hope they come back with a sense of wanting to travel more,” Rodriguez said before the trip. “Being able to bring their experiences and encourage other students to do the same.”

Students were addressed by an Aurora city official and an elected representative as they gathered outside East Aurora High School before they left for the airport.

The trip was paid for by parents and through fundraising. In some cases, students worked nearly two years to raise the money to travel, Rodriguez said. The group brought donations of school supplies and shoes collected from the community and East High teachers.

Margarita Moriwaki, whose daughter Jerri Delgado also traveled on the trip, said such trips encourage students to see the world outside their community and “want more in life.”

Delgado, who graduated in May, said people seemed to know and help each other in Cuba. She came away from the trip thinking about the importance of family, she said.

“It was different than what our history books had taught us,” she said.

Francisco Losoya, who will be a senior in the fall, came back thinking Cuban food is better than American food, and “we shouldn’t take anything for granted here.”

Many students realized they had misconceptions about Cuba, Rodriguez said. They had conversations about Cuban views on health care and education, about poverty and what it means to be happy.

At the end of the day, Rodriguez said he hopes they saw their challenges and aspirations weren’t very different from those of the Cubans they encountered on the trip.