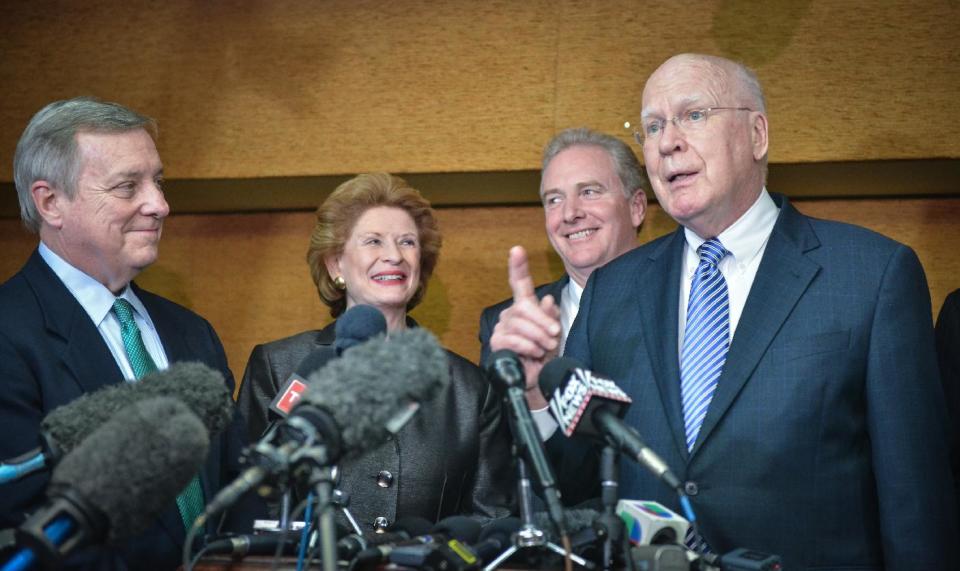 HAVANA (CNN) — The United States is entering “a new era” of closer ties with Cuba, according to the first U.S. congressional delegation to visit the island since President Barack Obama announced last month the restoration of diplomatic relations with the communist-run island.

“I am glad to be in Havana and glad Alan Gross is not,” said Sen. Dick Durbin, D-Illinois, referring to the U.S. State Department subcontractor, who was freed last month as part of the landmark deal. Gross had spent five years of a 15-year sentence in Cuban prison for importing banned communications equipment to Cuba.

The group met with Cuban officials to talk about improving political and trade relations.

On Wednesday, a State Department delegation will travel to Havana to discuss migration issues and the restoration of full diplomatic ties.

The meetings mark the highest-level talks between Cuba and the U.S. governments in 35 years, U.S. officials said.

“This is historic,” Durbin said at a news conference in Havana on Monday. “We were frozen in the same foreign policy with Cuba for over 50 years. Finally this President came to the realization that this policy wasn’t serving the interest of the United States or of Cuba or of the world.”

The two sides are expected to discuss increasing staffing numbers and the restriction currently placed on U.S. diplomats that forbids them traveling more than 25 miles from the interests section.

U.S. officials have also said they will push for Cubans to have free access to the soon-to-reestablished U.S. embassy, which they said could open before Obama and Cuban leader Raul Castro next see each other at the Summit of the Americas in April in Panama.

U.S. lawmakers opposed to the normalizing of relations said they may try to block the confirmation of a U.S. Ambassador to Havana and any increase in funding to the US diplomatic mission there.

But John Caulfied, who served as chief of mission to the U.S. Interests in Havana from 2011 to 2014, said having a U.S. embassy in Cuba would ultimately serve American interests.

“We have a large number of Cubans emigrating to the U.S. and now visiting the U.S.,” Caulfield said. “Likewise, we have many more Americans coming to Cuba and a small percentage of those run into problems. They have accidents, they become injured or ill and wherever they are abroad they look to the U.S. embassy to provide assistance. We will need additional full time staff to deal with these challenges.”

Last week, the U.S. relaxed some of the travel restrictions, meaning more Americans can visit the once off-limits island nation.

The change in policy is expected to also allow major U.S. airlines to provide regular service to Cuba.

While travel restrictions are only now being loosened, already people are visiting Cuba from the U.S. in greater numbers. Last year, 100,000 U.S. citizens visited Cuba on “people-to-people” cultural travel, and some 400,000 Cubans living in the U.S. made trips back to the island.

There was also some easing of commercial rules — Americans can use credit cards while there, and they can bring back $400 worth of Cuban goods and $100 of cigars or rum.

The major shift in U.S. policy could be featured in Obama’s State of the Union address on Tuesday, as the White House announced Alan Gross would attend the speech as a guest of first lady Michelle Obama.

Leahy said that Gross was still transitioning from a prisoner languishing in Cuban prison to being feted by Washington’s political elite.