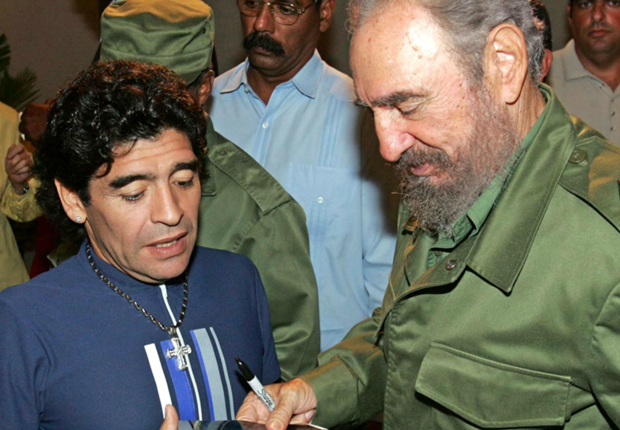 ‘I am coming here to be with my second father, with the legend going away from us, but he is leaving such a clear legacy, that we cannot betray. Those who think Cuba is getting weaker, because the greatest is now gone, are making a full mistake,’ Maradona stated.

‘Cuba must get stronger,’ said the former world soccer star, who also said that ‘Fidel is still inside our heart, he is ours.’

Maradona, who now lives in the United Arab Emirates, as sports ambassador of this Arabian country, talked about his relation with the historical leader of the Cuban Revolution, qand commented that in a hard time of his own life, the Cuban revolutionary fighter opened him the doors of the socialist Cuba.

‘He advised me on what I could do to recover myself from the use of drugs,’ Maradona said.

Maradona highlighted Fidel Castro’s leadership, not only in Cuba, but also at world level, saying Fidel was ‘a true leader.’

He took the chance to send a very sincere greeting to the whole Cuban people, to tell them that his heart, is with the Cuban people.

‘I am a Cuban soldier, before I am a soldier of President Macri. My heart, and all of my body and blood, I would give for the Cuban national flag, for Cuba, for Fidel and for Che Guevara,’ he stated.

The ashes of Fidel Castro, deceased on Novemver 25 at the age of 90, are being transferred from Havana to Santiago de Cuba, east of Cuba, to where the ashes will arrive Saturday.