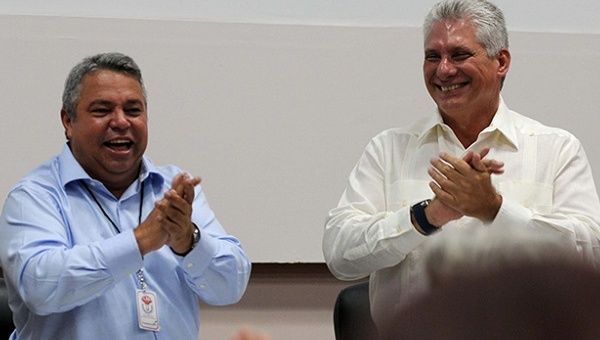 Published October 13, 2018 teleSUR | “We have to defend cultural development and artistic creation from banalities that some try to impose from the outside,” said Cuban President Miguel Diaz-Canel.

During the closing ceremony of the 1st National Conference of the Culture Workers’ Union, the Cuban President Miguel Diaz-Canel called for clarity to distinguish between creativity and the commodification of art, as he claims sectors of society are aiming for the latter.

“We have to defend cultural development and artistic creation from banalities, vulgarities and paradigms that some try to impose from the outside,” said Diaz-Canel. “And that can be achieved from dialogue, debate, discourse.”

The president said there are people trying to do everything possible to keep government away from culture, especially those opposing the revolution, when discussing issues. He warned there’s a growing tendency of speaking about “art consumption” trying to turn art into a commodity and putting personal enrichment before the development of authenticity.

Diaz-Canel warned about the risks of culture homogenization through rupture of the people’s historic memory, the negation of its history and identity, by perverse and alienating content. He called for an artistic emancipatory platform to defend Cuba’s identity and highlighted the Revolution’s cultural policy, emanating from Fidel’s discussions with artists and intellectuals, and its achievements such as the literacy campaigns, artistic teaching systems, events and arts’ development.