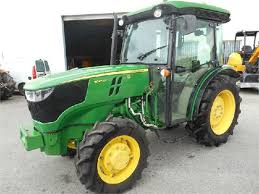 Nov 10 (Brownfield Ag News for America) John Deere is preparing to sell tractors to Cuba for the first time in 50 years.

“This equipment has to be tested and appraised by the Cuban Agricultural Ministry to ensure it will work for their needs and conditions.  If they agree the equipment is appropriate for Cuba, then there will be shipments over the next four years.”

Deere plans to sell Cuba smaller tractors and implements to be used mostly for dairy, row-crop, and specialty crop production.

“Today Cuba imports about 60 to 80 percent of its food, and improvements in the agricultural sector there will help improve the availability and affordability of food for the Cuban population.”

The announcement by Deere follows reports that a Caterpillar dealer will open a distribution center in Cuba, becoming the first U.S. company to have a physical presence in the high-profile Mariel Special Development Zone.

According to the Cuba Standard report, both companies seem to be racing to establish a foothold in Cuba before the Trump administration slams the door. In July, President Donald Trump announced he would prohibit sales to armed forces-controlled entities.