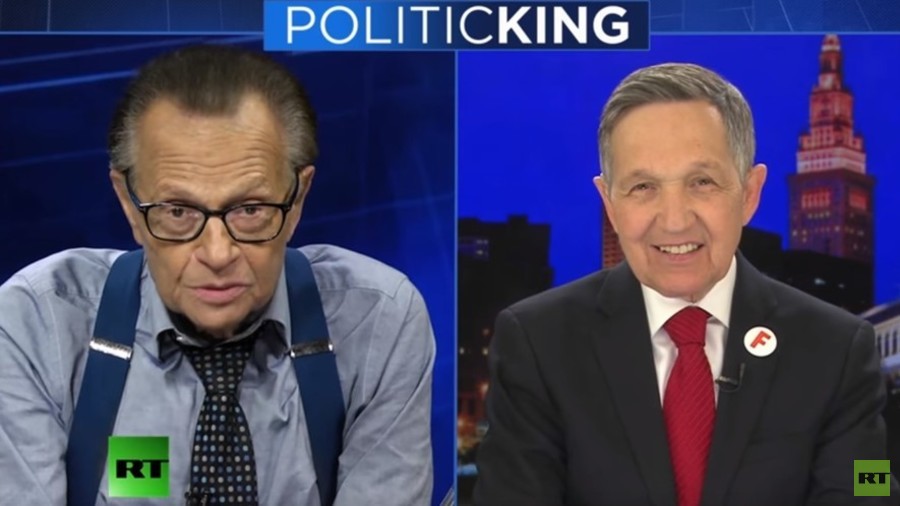 April 29 (RT News) The current Ohio gubernatorial candidate claimed there are elements in the Pentagon, the State Department, and the CIA trying to influence the Trump administration to be “more hawkish, more interventionist.”

“Frankly it appears they have succeeded,” he told host Larry King, apparently referring to recent US airstrikes in Syria, before giving examples of similar action taken by Presidents Barack Obama and George W. Bush.

In the latter’s case, the president was pushed to attack Iraq by the Pentagon and the State Department, Kucinich said. “Bush didn’t understand international relations.”

Kucinich also blamed these agencies for foiling a potential ceasefire tabled by the Obama administration in Syria: “A few days after that, without the president’s say so, there was an attack on a Syrian army base that killed 100 soldiers – Russia pulled out of the deal.”

“Who did that? The president? No. It was done extra constitutionally by elements in the Pentagon, in the CIA and in the State Department.”

“It’s about elements in the government who have their own idea of the way policy should go but they weren’t elected by the American people. And should we be concerned about that, you bet we should,” he warned.

Kucinich came under fire recently for taking a $20,000 payment to speak at a UK conference organized by a group opposed to US-led regime change in Syria. He insists his focus is on resolving conflict through multi-party talks.

“My involvement has always been to try to keep things on a path towards peace, to open up a dialogue with all parties,”he said.