Deep in the Birthplace of Cuban Rum and the Daiquiri 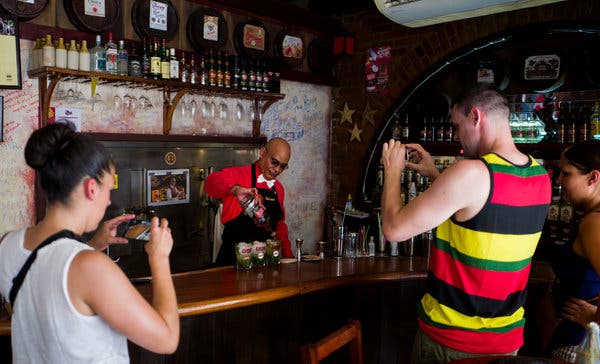 Eduardo Corona, center, is a bartender at El Traguito, a bar below the Museo del Ron in Santiago de Cuba.CreditEliana Aponte Tobar for The New York Times

Far from the tourists in Havana lies Santiago de Cuba. There, rum became a refined drink, and its signature cocktail still thrills.

SANTIAGO DE CUBA — The best rum bar in Cuba may be the one in the basement of a sparse museum in the center of this colonial port city, an 11-hour drive from Havana on the island’s southeastern coast.

The bar, El Traguito, occupies just a few hundred square feet that open onto a quiet side street below the Museo del Ron, the rum museum upstairs. It bears little resemblance to the expansive rum palaces of Havana like El Floridita, with its assembly-line drinks, its throngs of tourists and its statue of Ernest Hemingway, who made it world-famous, leaning over the bar.

What El Traguito does have is Eduardo Corona, its cantinero, or head bartender. Bald, compact, animated and wearing sunglasses even in the bar’s dark, cool interior, Mr. Corona is a master craftsman, whose rapid-fire patter counterpoints the slow precision with which he makes his drinks. He is also a fierce advocate for Santiago de Cuba’s underappreciated legacy as the birthplace of not just Cuban rum, but its most popular vehicle, the daiquiri.

Santiago’s rum culture, Mr. Corona says, is as much about the relaxed pace of life, and bartending, on Cuba’s Caribbean coast as it is about the history and character of the drink itself.

“El Floridita prepares its drinks too quickly,” Mr. Corona told me. To drive his point home, he spent the next 10 minutes making a mojito, a process that begins with a barrel stave doused in Santiago de Cuba rum, which he lights on fire; he catches the smoke in a tumbler glass, where he then builds the drink. It is refreshing, not too sweet — and delicious.

People have been making rum in the Caribbean for centuries, ever since Spanish settlers imported sugar cane plants in the early 16th century. But it was not until the mid-19th century that Facundo Bacardi, a distiller in Santiago, perfected what is now regarded as the Cuban style: refined, even delicate, with none of the heavy, funky flavors of its predecessors.

“He turned rum around, making it dry and acceptable to modern palates,” said Wayne Curtis, the author of the newly revised book “And a Bottle of Rum: A History of the New World in Ten Cocktails.”

These days rum is made in large state-owned distilleries scattered around Cuba — including the country’s flagship brand, Havana Club, which is produced in Santa Cruz del Norte, about an hour east of Havana, and exported by Pernod Ricard.

But bartenders in Santiago still prefer the brands produced at Bacardi’s original distillery, on the northern edge of the city’s downtown. These include El Caney and Santiago de Cuba, which are prized for their rich, complex flavors — and are hard to find outside the island.

“It’s the heat of the area and how it affects the aging process, along with its proximity to the ocean and the salty air,” said Julio Cabrera, a bartender who was born in Cuba and now works at the Regent Cocktail Club in Miami Beach. “It brings out notes of tobacco and vanilla.”

The Bacardi distillery is off-limits to visitors — though it has a well-appointed tasting room and retail shop — and it keeps silent about its production methods or aging process. (The distillery is unrelated to the modern Bacardi company, which has its headquarters in Bermuda and makes its own version of Havana Club in Puerto Rico for sale in the United States.)

According to Mr. Corona and others, one secret to the Santiago distillery’s high-quality rums is its enormous library of aging barrels. “Some of that rum is 40, 50 even 60 years old,” he said. Blenders draw from those superannuated barrels to add depth and character to much younger rums.

“Even the best Havana Club rums, they use some of Santiago’s old stocks to round them out,” Mr. Cabrera said. “Rum from Santiago is really good.”

Despite rumblings from Washington, it is relatively easy for Americans to try those rums for themselves. The State Department allows independent travel under a broad category called “support for the Cuban people,” which requires visitors to spend money on privately owned hotels and restaurants and avoid businesses affiliated with the Cuban military.

With those restrictions in mind, I recently flew to Cuba from Fort Lauderdale, Fla., to do research for a book on the Rough Riders, the cavalry regiment led by Theodore Roosevelt that helped capture the city during the Spanish-American War in 1898. I knew that Santiago had a long history of rum making, but it turns out that the history of the war and the history of Cuban rum have deeper links than I had thought.

Just east of Santiago is a beach called Daiquiri, which had been used by mining companies as a port to load ore onto ships; it served as the first landing site for the American invasion. According to local lore, around the time of the war an American miner had the idea of taking a local drink made with citrus, rum and sugar and adding ice. Another version of the story attributes the drink to an American soldier; today the bar at the Army-Navy Club in Washington is called the Daiquiri Lounge.

It was a simple innovation, but the cooling cocktail was an immediate hit on the island, and quickly made its way north, bearing the beach’s name.

These days most people think of daiquiris as sickly sweet, blended concoctions, often loaded with fruit and consumed by the gallon during spring break. Not in Santiago: Bartenders here make daiquiris shaken on ice, not blended, and with a precise balance between sweet and citrus that gets closer to the true essence of the cocktail.

“In a proper daiquiri you should taste the rum, then the lime; there should be enough sugar to balance it, but it should be on the sour side,” Mr. Cabrera said. And it is not always a lime: Early recipes for daiquiris sometimes called for lemon juice instead.

One Friday evening I ordered a daiquiri on the rooftop bar of the Hotel Casa Granda, which opened in 1914 and looks out over central Santiago’s main square, the Parque Cespedes. Though just five stories tall, the hotel, a favorite of Graham Greene, is high enough to offer a sweeping view of the city, its port and the Sierra Maestra Mountains just beyond the city limits.

The drink was refreshing, and so was the scenery. Unlike Havana, Santiago is isolated enough that it is still largely untouched by tourists, and the crowds at the bar and down in the streets appeared to be mostly locals. Everyone, it seemed, was drinking mojitos and daiquiris, reveling in their city’s open secret — one that, for just that moment, I was able to share.