Dee Dee Bridgewater Delighted To Be In Cuba 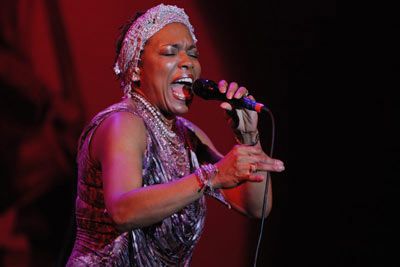 Havana, Jan 18 (Prensa Latina) U.S. singer Dee Dee Bridgewater, one of the stars invited to the 33rd International Jazz Plaza Festival, expressed today her happiness for being in Cuba, a country she visits for the first time.

It is a pleasure to be here, in such a special event,’ said the artist at a press conference held in a hotel in the capital, while confessing her ‘admiration and respect for the Cuban music and performers.’

Bridgewater will debut today on Cuban stages, with a concert in the Sala Avellaneda of the National Theater, where she will be accompanied by her compatriot, trumpeter Theo Croker and his band Dvrk Funk.

On the evening, the multi-awarded singer announced that she will make a tour of her wide discography with a selection of songs that, she thinks, ‘may interest the public’.

The African-American singer, considered an artist of cult within jazz, commented that this visit had been postponed for a long time, because she handled the possibility of traveling to the island since the years when she worked with the legendary Dizzy Gillespie.