“Deafness” that reaches the other side of the world 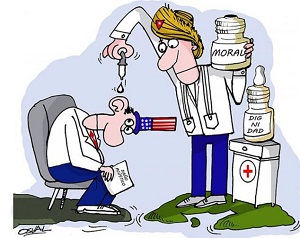 June 18 (Cubadebate) The story of alleged sonic attacks on U.S. diplomats accredited in foreign countries has been repeated, just the same as in August of last year, when Washington, without proof, accused Cuba of such incidents.

In that case, after numerous investigations by the parties involved, no evidence to support the allegations was found. A report by AP even notes that the Federal Bureau of Investigation (FBI) found no evidence of the attacks.

In spite of this, the United States government decided to adopt unilateral measures, among which, as is well known, was to cut staff at its embassy in Havana to a minimum, representing a clear setback in the improvement of relations between the two countries, initiated in 2014 under the Barack Obama administration. In addition, the U.S. expelled 17 Cuban diplomats from its territory.

Now, the same allegations have shifted to focus on the other side of the world. The United States has issued an alert to its citizens living in China, warning them to seek medical attention should they present symptoms similar to those experienced by a U.S. government official, who according to reports shows signs of a mild brain injury after experiencing “subtle and vague, but abnormal, sensations of sound and pressure.”

That same warning also points out that: “We do not currently know what caused the reported symptoms and we are not aware of any similar situations in China, either inside or outside of the diplomatic community.”

U.S. Secretary of State Mike Pompeo stated that the symptoms are very similar and consistent with those presented by U.S. officials working in Cuba.

Meanwhile, in a joint press conference with Pompeo in Washington, Chinese Foreign Minister Wang Chi stressed: “We don’t want to see that this individual case will be magnified, complicated, or even politicized.”

Chinese Foreign Ministry Spokesperson Lu Kang argued that: “China always protects the safety of staff in foreign diplomatic missions in China, including those from the U.S. side, in accordance with the Vienna Convention.” This is also how Cuba responded.

Kang added that China conducted a serious investigation and offered special feedback to the U.S. “We have found no reason or clue for what was reported by the U.S.,” he concluded. And thus too was the case in Cuba.

TEN FACTS ABOUT THE ALLEGED SONIC ATTACKS IN CUBA

1.-There is no scientific evidence to prove that sonic attacks on U.S. diplomats in Cuba were carried out.

2.-The symptoms described by Washington and leaked by the press do not coincide with the effects of sound on human health.

3.-The context in which the alleged incidents took place, at sites guarded by the U.S. itself and without direct, open access, as well as the fact that only specific people were hurt, but not others, is implausible.

4.-There are other probable causes, including psychosocial factors, which would much better explain the varied symptomatology, alleged by Washington. These must be studied in depth before issuing a definitive opinion.

5.-Cuba is not familiar with, nor are there any precedents for the use of sonic weapons in its national territory. While these weapons do exist, they are in the hands of the great powers and their effects are different from those described.

6.-The committee of Cuban experts that analyzed the case was limited by the lack of collaboration from U.S. authorities, who have not shared all available information, or allowed access to patients or their medical records.

7.-Cuban specialists are willing to collaborate with their U.S. counterparts in a transparent manner, to reach conclusive results.

8.-Cuba is renowned for its compliance with the Vienna Convention and has never perpetrated attacks of any kind against diplomatic personnel from any country, or allowed its territory to be used to do so.

9.-On the contrary, Cuban diplomats have been victims of acts of violence in the U.S., carried out by members of well-known terrorist groups with links to Washington.

10.-Those sectors opposed to the improvement in relations between the two countries have manipulated the issue of supposed sonic attacks to justify the setback in bilateral ties.

WHAT INTERNATIONAL EXPERTS HAVE SAID

“The audiologist community is wondering what the cause of the symptoms described could be, because nobody has a good explanation for it… The sudden onset of hearing loss without an audible source is very unusual.”

Otolaryngologist, Department Chair of Otolaryngology-Head and Neck Surgery at the University of Southern California

“I find it hard to believe that there actually is such a device… For a sonic weapon to cause hearing loss the person has to hear the sound.”

“There’s not that much evidence there about how ultrasound or infrasound impacts human health.”

Neuroscientist and author of The Universal Sense: How Hearing Shapes the Mind

“There isn’t an acoustic phenomenon in the world that would cause those types of symptoms… No known equipment that can be inaudible or undetectable could have the properties attributed to these strange sonic weapons.”

Psychoacoustics expert; researcher at the Massachusetts Institute of Technology (MTI)

“Brain damage and concussions, it’s not possible… Somebody would have to submerge their head into a pool lined with very powerful ultrasound transducers.”